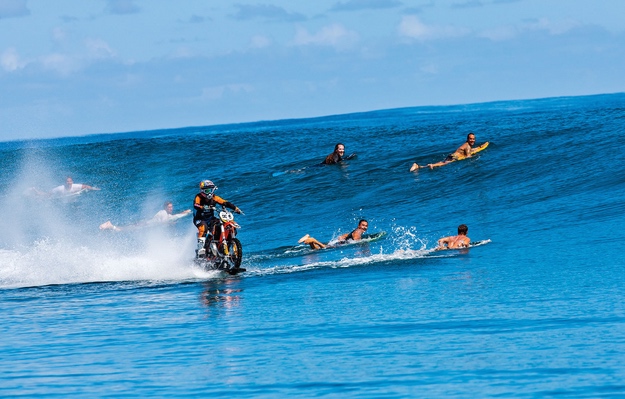 Just when you think you’ve seen it all, a video like this comes around and leaves you speechless. One even struggles to come up with the words to accurately describe how insanely cool this video of Australian motorcycle rider and all-around daredevil Robbie Maddison is.

What you’re about to see here is the real deal. There’s no CGI or anything of the sort. Just breathtaking footage of Maddisson not only riding across the water on his motorbike, but actually using it to surf the famously challenging Teahuo’po wave in Tahiti.

An achievement two years in the making, this is without question one of the coolest stunts we’ve seen in a long time.

As for the whole story behind the adventure, Transworld Motorcross has an awesome behind the scenes recap of everything that went into making the video above a reality.

Thinking two steps ahead is a gift/curse that Maddison is burdened with, and he didn’t simply set his sights on riding across water but on riding a wave in the ocean. And, of course, not just any wave would do, it had to be the legendary Teahupo’o reefbreak in Tahiti, French Polynesia.

Maddison’s early attempts involved a Honda CR500R, outfitted with two skis: one beneath the front wheel and a larger one that extended from beneath the frame back to the rear wheel, which was outfitted with a paddle tire normally used for dune riding. With no existing “water bike” projects to learn from, Maddison and his team experimented with a wide range of options, including dozens of different ski and tire options, and even a booming KTM 450 SX-F four-stroke. “Contrary to what you might assume, the overall power output of the bike didn’t have that much effect on its ability to ride across the water,” says Maddo’s mechanic, Buddy Morgan. “Instead, it was the shape and angle of the skis and the number of paddles on the rear tire that made the most difference.” As one might think with such a project involving so much trial and error, sinking the bike was a very real part of the learning curve. “I’d say that through the entire project, we sank the bike 30 to 40 times,” explains Morgan, who was faced with a five-hour workload every time the motorcycle was submerged.

Not surprisingly, the numerous trial and error runs would sometimes result in serious injuries. “Over the past two years of working on this,” Maddisson explains, “I’ve dislocated my shoulder, broken my ankle, and had a few concussions.”

The entire article is a fascinating read and well worth checking out.

Now as for what’s it like riding a wave on a motorbike? Well it’s certainly not for the faint of heart, as evidenced by the tweet below.

Going into further detail, Maddison relayed the following during an interview with Surfer:

The thing that sticks with me the most after that whole experience was how physically demanding it was. Honestly, I really thought that getting the right wave would have been easier [Laughs]. I don’t think the photos or video show how physical it was. You can’t see that when the wave broke right behind me, I honestly thought that might be the end of my life. I’ve never felt like I was in the wrong place at the wrong time more than I did right there. It was a near-death experience. At the end of the day, the images and footage say something pretty awesome, but the ferocity and how gnarly that thing was can’t really be put into words.

It’s hard to argue with that.