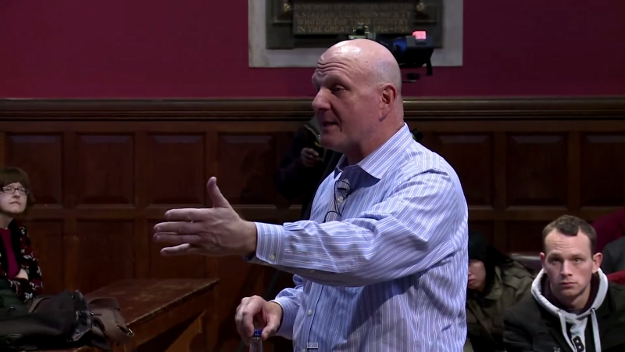 It’s been a while since we’ve heard from Steve Ballmer, the boisterous ex-CEO of Microsoft, but highlights from his first public speech since stepping down from his long-held position have finally made their way online. Bloomberg has shared a video of the speech, in which Ballmer discusses his 34 years at Microsoft, Facebook’s acquisition of WhatsApp, the openness of Windows and the survivability of the modern technology company.

Ballmer began his speech by pondering what he should talk about now that he was no longer a Microsoft employee, but “wound up picking some themes that are about the same as [he] would have talked about while [he] was at Microsoft.”

After running through Microsoft’s growth beside the behemoth that was IBM and the explosion of Windows, Ballmer focused on the idea of a one-trick pony. “Many companies are essentially one-trick ponies,” Ballmer began. “If you’re a one-trick pony in business, you are fantastically successful. You learned how to do something brilliantly. You invented one thing, you got it right — that is optimal.”

Some lucky companies can sustain themselves on that one trick for decades, for which Ballmer points to Coca-Cola as an example. But more often than not, companies are forced to do a second trick, or they die. Microsoft’s second trick was implementing its microprocessors into the back-end of business computing. According to Ballmer, Apple also had two tricks: the Mac and low-power touch computing, starting with the iPod. Ballmer believes that phones could have been Microsoft’s third trick, but now that the mobile ship has sailed for the time being, Microsoft needs to figure out what its third trick will be.

Ballmer went on to discuss his view of Facebook’s acquisition of WhatsApp and Apple’s purchase of the company that built Siri:

Check out the rest of the speech below: