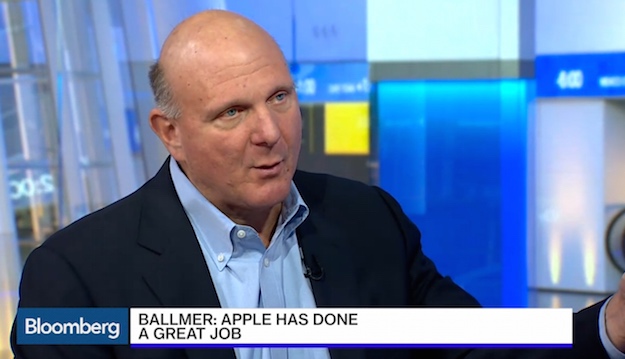 At the time, Microsoft’s deal with Apple not only helped rescue the company from the brink of bankruptcy, it gave Apple a much-needed lifeline, affording the company room and time to innovate. And as we all know, the deal ultimately helped set Apple up for the most astounding tech resurgence in history.

As part of the deal, Microsoft agreed to invest $150 million in Apple for shares of non-voting stock. Additionally, the two companies signed off on a broad patent cross-licensing agreement. And to top it all off, Microsoft promised to provide continued support for Microsoft Office for the Mac for a period of 5 years while Apple promised to make Internet Explorer the default web browser on the Mac for the same period of time.

So when asked about Apple during an interview segment on Bloomberg TV, Ballmer said that helping out Apple back in 1997 might very well have been the craziest thing Microsoft ever did.

They’ve done a great job. They’re a company that’s done a great job. If you go back to 1997, when Steve came back, when they were almost bankrupt, we made an investment in Apple as part of settling a lawsuit. We, Microsoft made an investment. In a way, you could say it might have been the craziest thing we ever did. But, you know, they’ve taken the foundation of great innovation, some cash, and they’ve turned it into the most valuable company in the world.

Though the deal was initially met with some trepidation amongst Apple fans, the deal was one of Steve Jobs’ greatest achievements. Not only did it put an end to an ongoing and destructive patent lawsuit, the influx of cash gave Apple enough breathing room to settle in and start focusing on releasing new products. As Jobs famously stated at the time, “we have to let go of this notion that for Apple to win, Microsoft has to lose.”