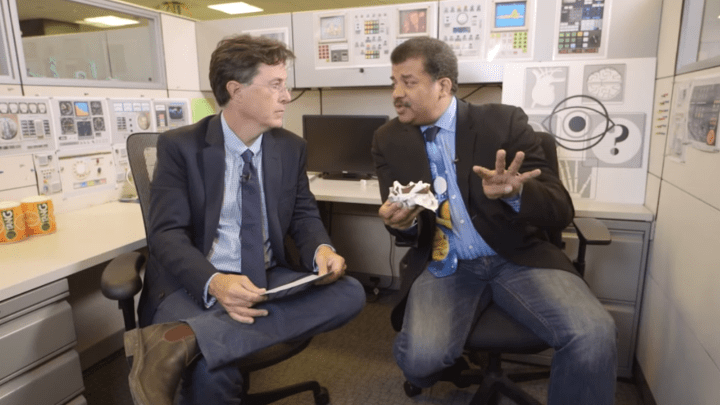 The photos of Pluto this week have been absolutely stunning, but Stephen Colbert isn’t satisfied. While the rest of us are waiting on pins and needles for more information, Colbert decided to wrangle Neil deGrasse Tyson for an interview in order to bash him for downgrading Pluto to a dwarf planet.

SEE MORE: Insane video shows an emergency airplane landing in the middle of a busy highway

“After almost a century of near total mystery, we finally know what Pluto really looks like: a malted milk ball left in the rain 4.7 billion miles from the sun,” says Colbert in his very scientifically accurate introduction.

After explaining the New Horizons mission, Colbert turns his attention to Tyson and proceeds to eviscerate him. When Colbert claims that Pluto is actually larger than we suspected, Tyson points out that in 1930, a New York Times article reported that Pluto was the same size as Earth.

Colbert fires back with a quote from the Agence France-Presse (AFP): “Already, scientists have learned from New Horizons that Pluto is 12-18 miles larger than previously thought, with a radius of 736 miles.”

MORE COLBERT: Stephen Colbert Just Interviewed Eminem on a Public Access Show and It Was Hysterical

It’s a real war of the minds, and hopefully yet another great indication of how hysterically funny and relaxed The Late Show will be when it premiere this fall.