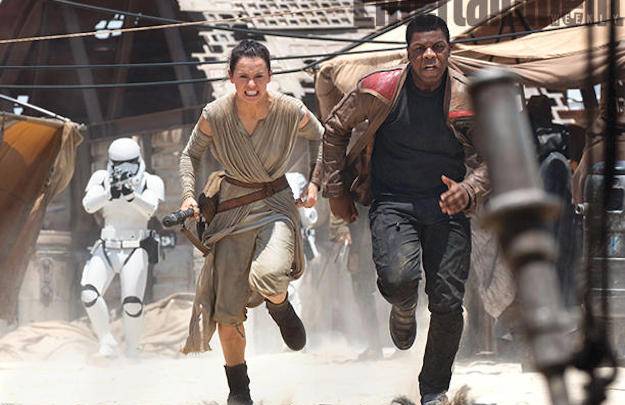 Earlier this week, Star Wars fans got excited over a second of unseen footage that appeared in a new trailer for the upcoming sequel. It might sound small, but for a movie being kept as close to the vest as Star Wars: The Force Awakens, it was a big deal.

On Wednesday, fans were treated to another surprise when Entertainment Weekly unveiled 12 new photos from the set of the film to go along with its cover story.

I won’t share all of the pictures here, but rather snag a few of my favorites from the piece.

First up, we have terrifying villain Kylo Ren and a small brigade of First Order stormtroopers destroying a Jakku village. His mask is slightly less blatantly sinister than Darth Vader’s, but I’m not surprised to see him walking away from a blazing inferno with a purpose.

There are few characters from The Force Awakens I am more excited to meet than Gwendoline Christie’s Captain Phasma. She looks like Boba Fett with a custom stormtrooper suit, which is all I really need to know.

Finally, some familiar (and metallic) faces! R2-D2 and C-3PO will both return for Episode VII, although it appears that our shiny golden friend has had one of his arms replaced since we last saw him in Return of the Jedi.

There are plenty more photos over at EW, so be sure to check them all out when you have a minute.