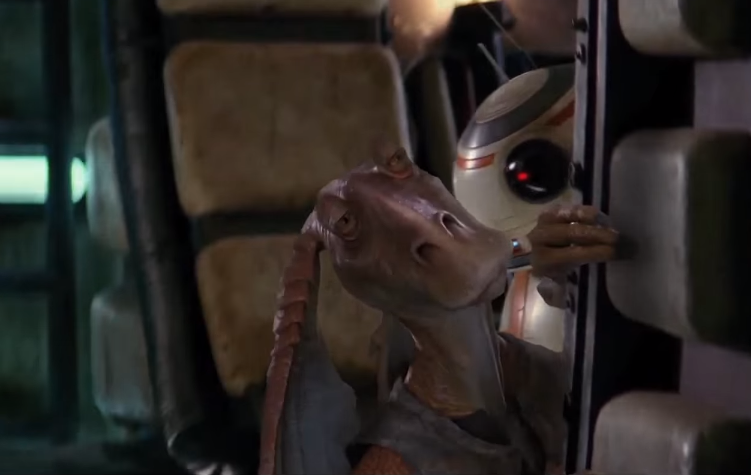 A specter is haunting the new Star Wars movie — the specter of Jar Jar Binks. While fans of the series of incredibly hyped for the new film after watching the new trailer that released this week, many of us also remember being incredibly excited after seeing trailers for The Phantom Menace only to have our hopes crushed thanks to the presence of Jar Jar Binks and the atrocious acting of Jake Lloyd. Now a new video posted by YouTuber murdockmotion plays on those fears by inserting Jar Jar into nearly every frame of the new Force Awakens trailer.

Here he is peeping over the shoulder of the film’s mysterious new villain:

Here he is standing behind actress Daisy Ridley:

The video doesn’t just troll Star Wars fans with Jar Jar either: It also inserts some Phantom Menace footage of Jake Lloyd flying in an X-wing fighter to make us think that the new film will also feature putrid child acting. It even edits George Lucas’s head onto Harrison Ford’s body to make it seem like he’ll have a significant acting role in the movie.

All told, this is grade-A trolling. Check out the full video below.