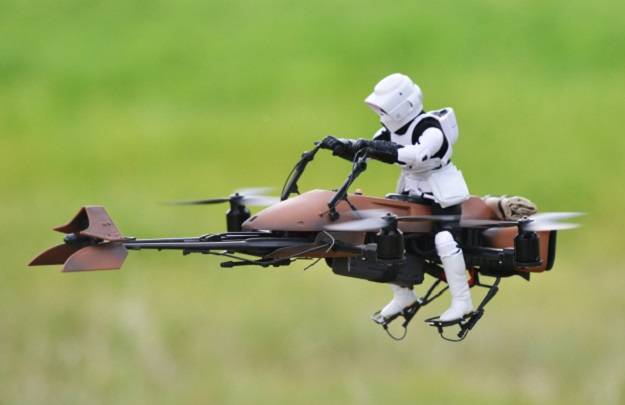 Given how unbelievably cool drones are, what with many being equipped with HD cameras and all, it’s hard to imagine how one might make a drone that much more compelling.

Well, Star Wars hobbyist and full-time Google engineer Adam Woodworth figured out how to do just that. Woodworth not too long ago placed a Star Wars Stormtrooper figurine atop of a heavily modified quadcopter drone, transforming it into an awesome 74-Z speeder bike, otherwise known as an Imperial Speeder Bike.

The result speaks for itself.

Don’t Miss: This is when you’ll finally be able to download Windows 10 for free

As one of the YouTube comments point out, now all Woodworth needs to do is “scale it up.”

As for how Woodworth accomplished it all, he has detailed explanations and instructions over on Makezine.

The body is from a 1:6 scale (or 12 inch) Hasbro Power Of The Force series Speeder Bike (if you do a deep nerd dive on wookieepedia its a “74-Z Speeder Bike” or “Imperial Speeder Bike”.)

The big challenge was to figure out how lift the whole thing, without making it look like just a big quad rotor tacked on. I did some layout in CAD, based off of an overhead picture of the model, and experimented with different rotor layouts that just barely cleared the rider and bike elements, kept the center of lift over the center of gravity, and was capable of lifting about 600grams.

Now the question is: when will someone do something similar with the Back to the Future DeLorean?