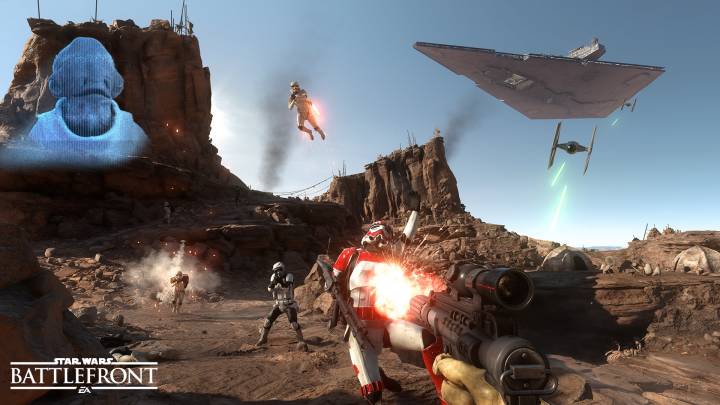 Having now spent several hours with Star Wars Battlefront, I’m finally beginning to get a grip on what exactly DICE is going for in this highly anticipated franchise reboot.

LAST TIME: If you haven’t upgraded to PS4 or Xbox One yet, you’re about to be left behind

The Survival mode is a fun distraction, but the Drop Zone and Walker Assault competitive modes are the real meat of the beta. I’d already spent some time with Walker Assault at E3, so I decided to start with Drop Zone on the Sullust map.

Drop Zone is a point control mode where two teams of eight players compete to capture escape pods crashing on the planet’s surface. After you or one of your teammates captures a pod, your team has to defend the pod for several seconds while the other team attempts to wrest in from your grasp.

It’s a small-scale introduction to the gameplay, set on a map that feels manageable for a new player. There are cliffs and chasms checkered all around the desolate landscape, allowing for tactical advantages (providing your team is willing to coordinate).

After getting slaughtered by my foes for the first few rounds, I realized that the only tool I had available was the gun in my holster. Until you rank up, you don’t have access to grenades, jetpacks, sniper rifles or any of the other equipment that opposing players were using to blast me back to the stone age.

Once I slogged through a few rounds of misery, occasionally working my way behind enemy forces to get a few cheap kills and riding on the shoulders of players who had already gained a rank or two to win some matches, I was finally able to purchase a grenade and a Cycler Rifle — the latter of which became a cornerstone of my success in subsequent matches.

I was finally comfortable with the controls, I’d stocked up on weaponry, and I even came in first place once or twice (citation needed) — I was ready to jump into Walker Assault.

Alright, I need you to trust this wasn’t my best game. In fact, it was among my worst (you can check out the end of the video from earlier this week to see a match where I absolutely dominated), but there is some degree of luck involved in a mode this huge.

Walker Assault pits 40 players against one another, 20 per team, on a massive battlefield that actually grows as the battle drags on. Even with all my equipment slots filled, I still found myself getting splattered across the snow on more than one occasion.

The problem with Walker Assault is its balance, or complete lack thereof. In my third or fourth match, I picked up an AT-ST token maybe a minute or so after all of the players spawned. I pushed forward as quickly as possible, planted my vehicle at the base of the mountain where the rebels spawned and proceeded to rack up 13 kills before I was taken down.

It was like shooting monkeys in a barrel. But the monkeys were digital rebels and the gun was a robot the size of a building.

I’ve been on the other side of that onslaught, and it’s the most frustrating, ridiculous moments of any Battlefront match. None of us had anti-vehicle weapons with which to dispatch the chicken walker, so we had to wait for someone to work their way to a turret stationed in the middle of the battlefield to chip away at its health.

Save for that annoyance, the battles are just as chaotic as you remember from the original Battlefront games. If you run out into the open, you’re going to be gunned down. If you’re running down a corridor with reckless abandon, you’re going to be gunned down. If you try to take on a TIE Fighter pilot who knows what he’s doing… you get the picture.

You have to balance a guns-blazing mentality with an awareness of your surroundings. Stick with teammates, but don’t get caught in an airstrike. Try to flank the other team, but don’t take yourself out of combat for too long.

It takes time and patience to become a competent Battlefront player, but as I explore the unexpected depth of this game, I’m beginning to gain a new appreciation for it. Having hit rank 5, the max rank of the beta, I now have all the tools I need to succeed — now it’s just a matter of staying competitive with everyone who’s sure to spend the entire weekend locked into the beta.