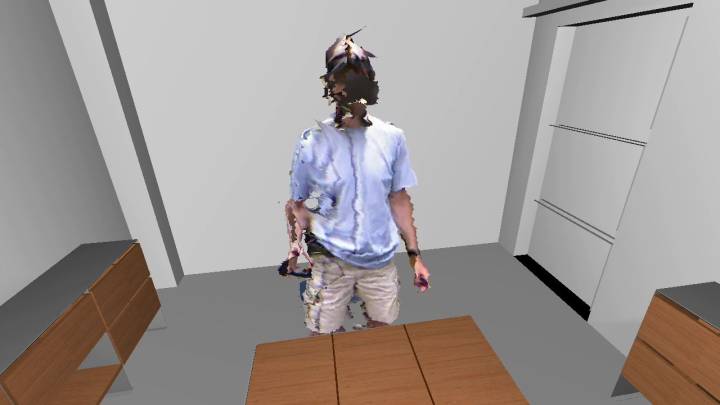 All proper sci-fi nerds have long dreamed of being able to take a trip in the Holodeck, a virtual reality chamber located on Star Trek’s USS Enterprise where you can simulate any time, place and situation you want to be in. Oliver Kreylos, a computer science professor and researcher at the University of California, Davis, has come the closest we’ve seen yet to creating a working Holodeck and he’s done it using an Oculus Rift virtual reality headset and three Kinect sensors from a previous-generation Xbox.

In Kreylos’s setup, the Oculus Rift serves as the main user interface that will immerse you into a virtual world. The three Kinect sensors, meanwhile, are set up to take footage of you in 3D and project a virtual avatar of your body into the virtual world shown on the Oculus Rift. This means that you’ll not only be able to look around in this virtual world but you’ll be able to see your own hands in front of you as though you’re actually in it.

This is obviously a crude setup compared to what we see in science fiction films and Kreylos admits that the first-generation Kinect faces some limitations that make his avatar image appear very fuzzy on-screen. Kreylos explains that he decided to not use the Kinect’s skeletal reconstruction algorithm in his setup because doing so would have created an unacceptable amount of latency. Instead, he would rather put up with having a fuzzy self-image than have a choppy experience in his virtual world.

Kreylos’s entire blog post explaining how he setup his own Holodeck is well worth reading and can be found by clicking the source link below. We’ve also posted some footage of Kreylos interacting with a virtual office below.