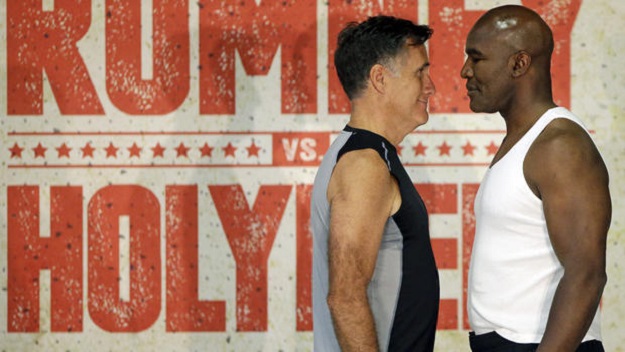 With the NBA and NHL playoffs in full swing, not to mention some exciting action from Major League Baseball  and various soccer leagues, this past week was chock full of great and crazy exciting sports plays.

Below are a few of the better ones you might have missed over the last 7 days.

We don’t usually start with hockey, but this one is too good to pass up. Nothing as cliche as a hockey player scoring a goal by headbutting it in soccer style. Alas, the goal was ultimately disallowed. The ‘goal’ was shot by Chicago Blackhawks center Andrew Shaw during Game 2 of the NHL Western Conference Finals.

In perhaps the most bizarre video of the year, we have former Presidential candidate Mitt Romney boxing(!) against former Heavyweight champ Evander Holyfield for charity. The fact that this is even a thing is beyond words. Here’s a clip of ole’ Mitt knocking down the champ in a bit of choreographed tomfoolery.

This video is probably something no one has seen before. A batter gets beaned by a pitch but manages to catch it between his arm and his back, all before casually tossing it back to the pitcher.

Next up, we have a BMX video that’s a tad more than a week old, but it’s so ridiculous we had to put in here anyways. This one’s a gem.

Now we have some NBA playoff action to attend to. Here, Stephen Curry nails a three in dramatic fashion. What else is new?

Heading down to the lower ranks of the bball world, check out this over the shoulder, backwards buzzer beater.

For any soccer heads out there, this throw from the goalie is absolutely incredible.

Sticking with soccer, check out this missile of a shot from the Bolivian league.

More funny than anything else, we have the University of Missouri baseball team warming up thanks to a player’s red hair. Watch out for the guy with a bat miming as if it were a hose.

And lastly, since we didn’t get this right when it happened, its worth highlighting  this clip of Luis Suarez getting all kinds of fancy against Bayern Munich earlier this month.

The genius of Luis Suarez. pic.twitter.com/2X77oW9IUG