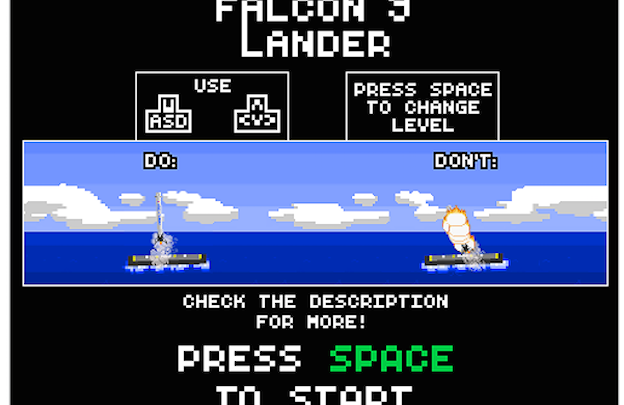 Twice this year, SpaceX has tried to launch a reusable rocket and have it return to earth and land safely on a floating ocean platform. Both attempts ended in failure. Undoubtedly an engineering challenge of the highest order, a SpaceX rocket this past April came remarkably close to sticking the landing before swerving slightly off angle just a moment before touchdown.

Though watching video of the failed landing might make it seem easy, there’s literally no room for error when it comes to getting a 360+ ton rocket to land gracefully, right side up.

Care to disagree? Well perhaps you’d like to channel your inner Elon Musk and spend some time playing a challenging new video game to test your skills behind the proverbial wheel. Called SpaceX Falcon 9, the web-based game comes out of MIT’s media lab and has a distinctly refreshing and nostalgic NES feel to it. The gameplay, while seemingly simple, is decidedly frustrating because landing a rocket ship on a floating barge, as it turns out, is beyond impossible. Who would have thought?

I thought instructions were supposed to make things easier. Oh well, guess it’s as good a time as any to read up on monopropellant.

My newly acquired knowledge of monopropellant notwithstanding, every single landing attempt ended up looking like this.

I’ll stick to Top Gun, thank you very much.

Think you’ve got what it takes? Hit the source link below and give it a try.