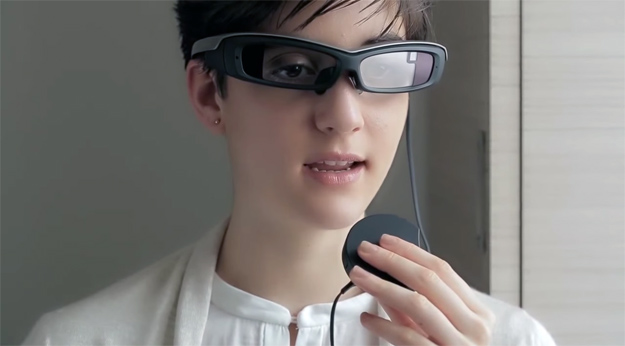 Google Glass, as we know it, is dead. The $1,500 connected eyewear was a bust for a laundry list of reasons, not the least of which was the fact that wearing the device looks absolutely ridiculous. As it turns out, however, there are even worse designs for smart glasses, and it looks like Sony is on a mission to prove it.

I initially had no plans to cover Sony’s “SmartEyeglass,” which were unveiled earlier this week. Like Google Glass, these Sony glasses are an early edition that isn’t quite meant for mass consumption.

Then… I watched Sony’s promotional video.

Google Glass puts a small screen in front of one eye that displays various content as you call upon it. Sony’s glasses go all in, however, with transparent displays in both lenses. The result is an interface that couldn’t possibly be more intrusive, at least according to the video.

And then, we get to the design, which is nearly enough to leave me speechless.

The glasses themselves are hideous, and then there’s a cable dangling off them that leads to a control box, which you are then expected to fasten to your clothing somewhere. This way you can quickly and easily clear the display before you trip over a bench while walking down the street because someone texted you and the notification obstructed your view.

The promo video is embedded below. Make sure you buckle up before clicking play.