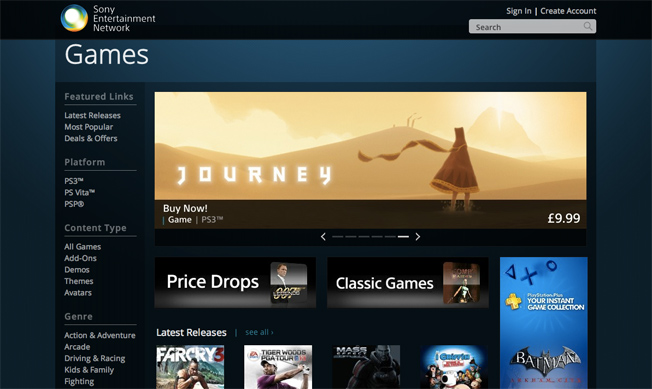 Continuing its efforts to make buying digital content for PlayStation consoles easier, Sony’s (SNE) quietly flipped the switch on for its Sony Entertainment Network Store. The new Web store finally allows games, movies and TV shows for the PlayStation 3, PS Vita, PSP, Xperia tablets and Xperia smartphones to be purchased through a Web browser and then queued up for download to a designated device. Content can be purchased with credit cards, pre-paid cards and even PayPal. Currently available only in Europe, Sony says the new SEN Store will launch in the U.S. next week and is part of the company’s latest round of updates that put it on equal footing with Microsoft’s (MSFT) Xbox LIVE for Xbox 360. As gamers would know, the Xbox 360 has had the ability to buy and download games remotely from the Xbox LIVE Marketplace Web store for a while now.