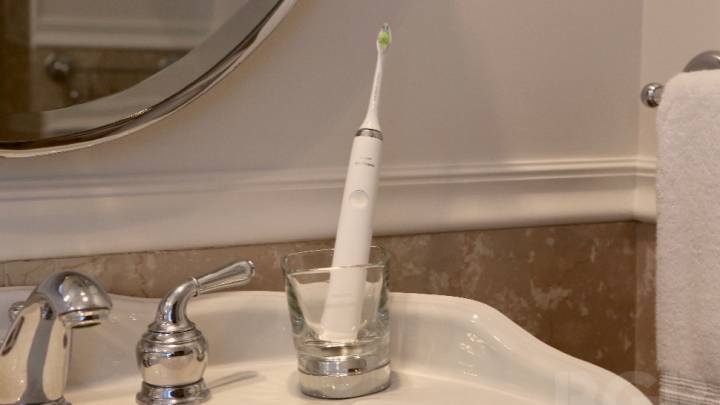 There are toothbrushes, and then there’s Sonicare. It is really that simple. We could spend days arguing about the difference between other electric toothbrushes that cost less, both by Philips and other brands. We could also simply pick one that’s less expensive and does a decent job like some people. But no, the Philips Sonicare DiamondClean rechargable sonic toothbrush is literally the best thing I have put in my mouth aside from the sabayon sauce at Per Se.

The Sonicare DiamondClean comes with two brush heads (one smaller for extra targeting), five modes, an amazing inductive charging base with either a stand up attachment or a cup, and a USB travel charger and case.

Philips says that this toothbrush removes up to seven times more plaque than a manual toothbrush, and it whitens teeth two times faster. While I can’t prove any of this (because, science), my teeth haven’t felt cleaner or looked whiter.

Hardware-wise, I love the soft finish of the toothbrush and the capacitive buttons work fantastically great. I normally stick to three modes: clean, polish, and white. The sensitive mode isn’t something I needed after the first couple of days, and the gum care mode is probably something that could have been excluded.

For the specs-heavy people out there, the brush delivers up to 31,000 brush strokes a minute, the battery lasts for three weeks on a single charge with regular usage, the base has illuminated touch-sensitive buttons, and the toothbrush has built-in times for each mode so you know when to move on brushing another zone. I didn’t even think I’d be writing about a toothbrush, but I love this thing and I’m also giving it a BGR Seal of awesomeness.

Philips is selling the Sonicare DiamondClean for $219, but we found it on Amazon for $189.