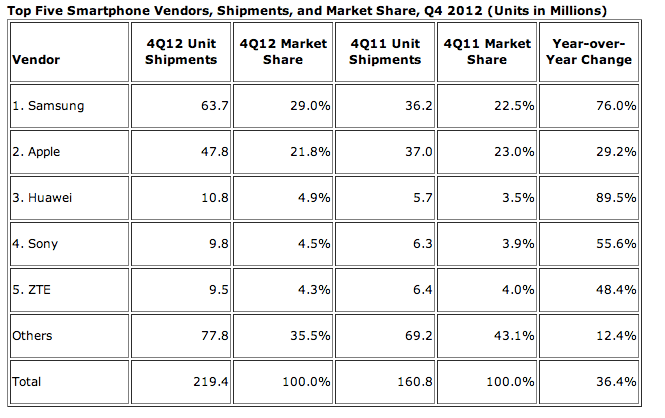 Research firm IDC released the latest numbers from its Worldwide Quarterly Mobile Phone Tracker this week and found that a total of 482.5 million mobile phones were shipped in the fourth quarter of 2012, an increase from 473.4 million in 2011. Smartphones accounted for nearly half, or 45.5%, of all mobile phone shipments, the highest percentage ever. Samsung (005930) and Apple (AAPL) remained the two top vendors with market shares of 29% and 21.8% respectively. The report did include some surprises, however.

Huawei, a company previously known for its telecom equipment, spying scandals and low-end smartphones, is in the midst of a major transition. Rather than focusing on cheap and carrier-branded phones, the Chinese company has begun to compete with high-end manufacturers such as Samsung and Apple with its new flagship devices.

Huawei experienced unprecedented growth in the fourth quarter of 2012 with shipments increasing 89.5% year-over-year for a 4.9% market share. Close on the company’s heels are both Sony and Chinese rival ZTE with 4.5% and 4.3% shares of the market respectively.

“The fact that Huawei and ZTE now find themselves among the Top 5 smartphone vendors marks a significant shift for the global market,” noted Ramon Llamas, research manager with IDC’s Mobile Phone team. “Both companies have grown volumes by focusing on the mass market, but in recent quarters they have turned their attention toward higher-end devices. In addition, both companies have pushed the envelope in terms of industrial design with larger displays and smaller form factors, as well as innovative applications and experiences.”