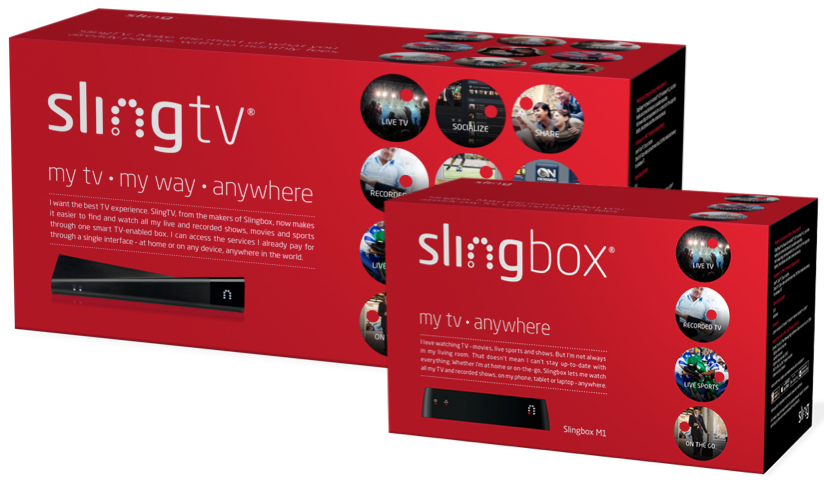 Sling Media on Tuesday unveiled two brand new Slingbox products alongside news that its SlingPlayer software will soon receive a major update. Sling Media is a pioneer in TV “place shifting,” having developed hardware and software solutions for years that allow users to stream live TV content from their homes to any computer, tablet or smartphone in the world. The company is currently facing a huge battle now that pay TV companies have begun to embrace streaming content in their own mobile apps, which now often stream TV shows and videos live or on demand. But that won’t stop Sling from launching two new products this summer.

The biggest announcement out of Sling on Tuesday is the new Slingbox M1, a powerful product that features an all new hardware design and an affordable price tag.

Sling’s new Slingbox M1 is the least expensive Slingbox the company has ever made. It features dual-band 2.4/5Ghz WiFi connectivity and a new configuration utility that will supposedly have new users up and running in less than 10 minutes.

Also announced Tuesday is the new SlingTV, which is basically a Slingbox 500 with a refreshed software experience. This is Sling’s flagship model for 2014 and it features a new on-screen main menu as well as a completely redesigned interface across the board.

Finally, the company said that its SlingPlayer app for the iPhone, iPad and Android devices will be updated on July 20th with new features including the ability to hand off video from a mobile device to a Roku or .

The new Slingbox M1 will launch on July 20th for $149.99, and the SlingTV will be released sometime in August for $299.99. Sling also noted that current Slingbox 500 owners will have their software updated so they can enjoy all of the new features in the SlingTV.

New Slingbox M1 and SlingTV Will Delight Mobile and Home Entertainment Users with New Features Including Discovery and Navigation Enhancements, Cloud-Based Social Media Personalization, and Ease of Setup and Use

FOSTER CITY, CALIF.—July 16, 2014—Sling Media, Inc., a wholly owned subsidiary of EchoStar Corporation (NASDAQ: SATS), today announced the Slingbox® M1 and SlingTV™, replacing the popular and award-winning Slingbox 350 and 500 models. Both of these retail products are the only solutions capable of delivering a customer’s pay TV channels and programs (live or recorded) from the living room to the most popular mobile devices in up to HD quality with no restrictions. In addition SlingTV delivers the power of a Slingbox combined with new “Smarter TV” features designed to enhance the TV viewing experience in the living room.

With a suggested retail price (MSRP) of $149.99, the new Slingbox M1 is the most affordable Slingbox that Sling Media has ever produced. Designed for the mainstream user who wants to have remote access to all of their home TV channels and shows as well as access to DVR content on personal computers, tablets and phones, the Slingbox M1 is offered in a compact, unassuming form factor that fits easily into an entertainment system. In addition, the Slingbox M1 integrates WiFi for simple network connectivity and utilizes the new Slingplayer for Desktop app for PCs and Macs. The new Slingplayer for Desktop app dramatically improves setup and configuration, allowing users to be up and running in less than 10 minutes. Furthermore, Sling customers will now be able to configure their new Slingbox M1 with a mobile device via the Slingplayer app for iPhone and iPad as well as Android-based phones.

Dual-band 2.4/5Ghz WiFi connectivity and Ethernet port
Absolutely no monthly fees for the Slingbox M1 or SlingTV
Watch and control live TV on a tablet, phone, PC or Mac
Easy and quick setup and playback via PC/Mac desktop apps, as well as iPhone, iPad and Android phone apps
Watch on a second TV anywhere via ® and Roku®
Play and schedule DVR recordings
Component and composite input/output

Powered by Slingbox 500 hardware, the new SlingTV gives customers a world class, exhilarating Slingbox experience in their living rooms that utilizes new tools to easily discover and navigate to TV shows, movies and sports in an elegant, seamless manner. SlingTV is a powerful Slingbox that gives customers access to their pay TV channels (live or recorded) on a laptop or desktop personal computer, tablet or phone at home or anywhere in the world a network connection is available. In addition, SlingTV is designed to make the living room TV experience more enjoyable and powerful by turning the television to which SlingTV is connected into a “Smarter TV” without having to purchase a new TV or pay for a set-top box upgrade. SlingTV has a suggested retail price (MSRP) of $299.99.

New on-screen TV main menu powered by the included SlingTV remote
Soft remote built into Slingplayer for iPhone or Android phone apps
Gallery View
A visual interface to easily find and select a show to watch
Filter by popular, favorite channels, sports, movies, kids programming, etc. currently airing, upcoming and in primetime
Rotten Tomatoes® ratings for all movies in Movies filter
Big screen TV scoreboard and channel guide. See all the scores and stats without changing the channel
Find out who’s playing, the score and the channel it’s airing on in a visual, easily navigated interface
Details View
Get detailed game stats in real-time for fantasy fanatics
Integrated Thuuz™ excitement ratings tell you when to tune into a game based on the score, the match-up, dynamic game momentum changes, etc.
Movie and TV episode details

“Once again, Sling Media is totally redefining the ‘TV Anywhere’ experience with the introduction of the Slingbox M1 and SlingTV,” says Michael Hawkey, senior vice president and general manager of Sling Media. “Customers interested in a no-compromise entertainment experience using the most popular devices will be delighted by the affordability and new features of the Slingbox M1. SlingTV completely enhances the living room TV experience with a visually stunning on TV user interface that takes ultimate advantage of social media data activity.”

Slingbox M1 will be available in retail stores, through Sling.com and online partners on July 20th. SlingTV will be available in late August. Existing Slingbox 500 customers will automatically receive the SlingTV software upgrade for FREE at that time as well. Sling Media’s retail partners include Best Buy and online retailers such as Amazon.com and TigerDirect.com.