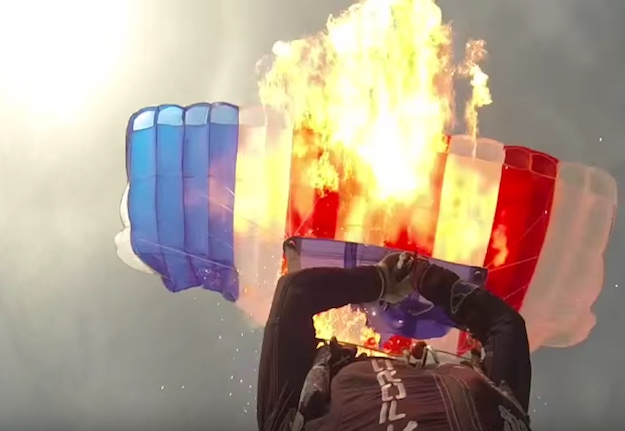 While it’s one thing to jump out of a perfectly good airplane with the proper safety precautions and requisite training, I think we can all agree that it’s flat-out insane to jump out of an intact airplane and purposefully set your main parachute on fire.

Unless, of course, you happen to be a seasoned skydiver and thrill-seeking daredevil named Brianne Thompson.

The YouTube description for the video below couldn’t be more literal: “Brianne Thompson kills a parachute with fire.” Indeed, after jumping out of a plane flying over Eloy, Arizona, the video shows Thompson purposefully lighting her main parachute on fire, leaving her only with a backup chute to land safely on the ground.

Is this a crazy stunt? Yes, it’s decidedly ludicrous. But at the very least, you can rest easy knowing that Thompson may be one of the few people on this earth that you can actually trust to pull off this type of maneuver and emerge with nary a scratch to speak of.

Her professional bio reads in part:

With well over 4,000 jumps to her name (she says she stopped keeping track), this stunt is arguably just a little bit less crazy than it may have initially seemed.

Though this clip was just uploaded to YouTube this week, the footage was taken from a longer 3-minute compilation video that was initially put up on Vimeo a few months ago.

AXIS A Case of the Mondays from AXIS Flight School on Vimeo.