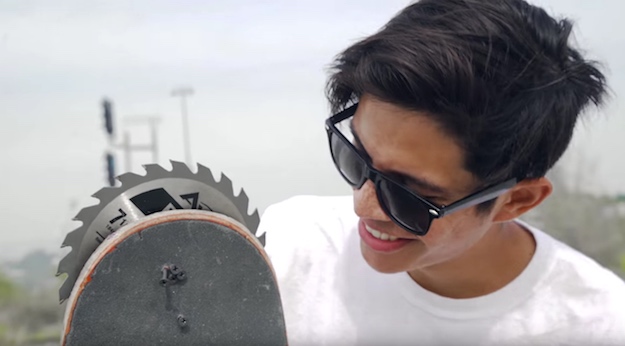 YouTube is littered with death-defying stunts and boneheaded experiments, but a recently uploaded video featuring a guy riding the ‘world’s most dangerous skateboard’ arguably sets an entirely new bar for stupidity, or perhaps bravery depending on your perspective.

Straight out of Los Angeles, Christopher Mann over the weekend decided to mod his skateboard into something straight out of medieval times. Along with a few of his friends, Mann hammered and drilled in upwards of 15 long nails into his skateboard. Not only that, he also affixed a buzzsaw to the bottom while also adding a tail devil to the back for a little spark action.

Now the video of Mann skateboarding on the dangerous board starts off innocently enough. We see Mann riding a bit slowly, doing some minor jumps, and never really risking coming into contact with the dangerous nails exposed on the underside of his board.

But it’s not long before Mann ups the ante and starts doing kickflips:

If this type of death defying video is your thing, Mann, who runs a semi-popular YouTube channel, has a number of other videos up that might be of interest. For instance, a video he posted of himself opening up a package with a can of deodorant and a lighter (thus creating a makeshift flamethrower) has already amassed over 114,000 views since being posted less than 10 days ago. You can check that clip out below.