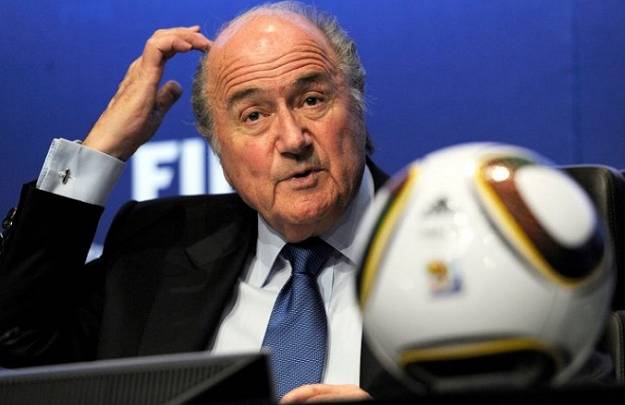 When it comes to corruption in sports, you’d be hard pressed to find an organization with fewer scruples than FIFA, the governing body of international soccer. Speaking to this point, authorities this past May indicted 14 FIFA officials on charges of wire fraud, racketeering, and money laundering. Suffice it to say, FIFA’s corruption is so rampant and has endured for so long that it makes the NCAA seem angelic in comparison.

In the wake of the aforementioned corruption scandal, FIFA president Joseph “Sepp” Blatter — long considered FIFA’s most corrupt official — resigned in early June. Earlier today, Blatter was once again in the news, this time attending a press conference designed to pick out an election date to determine his successor. The conference, though, was hilariously interrupted when British comedian Simon Brodkin threw a huge stack of money over Blatter’s head.

The video of the ordeal is absolutely priceless. Watch how Blatter’s facial expression quickly morphs from fear to a reaction akin to a stuffy old businessman exclaiming, “What is the meaning of this?!”