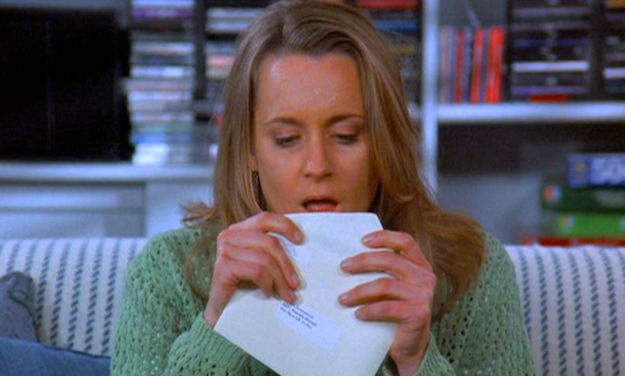 Even for a show as zany as Seinfeld, it was a little bit out there when the show abruptly killed off George’s fiancé Susan. If you recall, the character of Susan, played by Heidi Swedberg, died after licking wedding envelopes that turned out to be partially poisonous on account of George buying envelopes with low-quality glue.

Flash forward 19 years and we finally have a legit explanation as to why the show killed off Susan, and in such a strange manner no less.

The big reveal comes to us straight from Jason Alexander himself who recently explained the impetus behind Susan’s untimely death to Howard Stern.

The preamble to this is that the actress is wonderful girl, Ms. Swedberg, and I love her. She is a terrific girl. I love her. I couldn’t figure out how to play off of her. Her instincts for doing a scene, where the comedy was, and mine, were always misfiring. And she would do something, and I would go, ‘Okay, I see what she’s going to do, I’m going to adjust to her’, and then I’d adjust and it would change.

Alexander’s frustration with Swedberg was so great that when Larry David called him up at the beginning of season 7 to tell him that his character would be marrying Susan, his first response was to fire back, “Great! Who’s playing George?”

After every episode, we would all go out, the four of us and Larry, get a bite to eat and we would just bitch about everyone. And I kept saying, ‘I’m going out of mind, you guys. I can’t understand how to play off of this girl. I’m sure that this stuff isn’t working. It can’t be.’

And they’re going, ‘it works great, you don’t know what you’re talking about.’

I was the only actor doing scenes with her. And then finally, and they didn’t know how the season was going to end. Was George going to marry her? Was she going to leave him? So finally they do an episode where Elaine and Jerry have a lot of material with her. And they do the week, and then we get to the restaurant afterwards and they go ” You know what, it’s f****** impossible.” And Julia actually said, ‘I know, don’t you want to just kill her?’

And Larry went, ‘Kabang! Now we gotta kill her!’

Every time I tell this story I cringe because Heidi is the sweetest. It just, the way I came at stuff and the way she came at stuff [didn’t match].

And so there you have it; a mystery nearly two decades in the making finally solved.

Update: Alexander has since apologized for his remarks, noting that he feels “officially awful” while of course emphasizing that the entire cast adored her as a person.

You can listen to an audio clip of Alexander’s interview with Stern below.