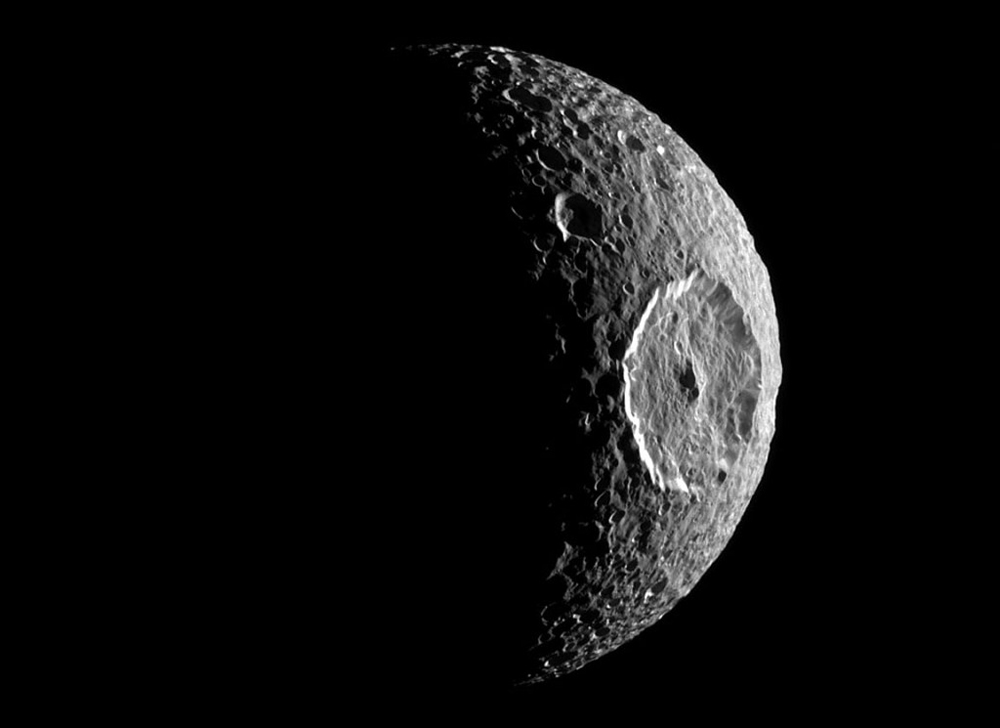 One of the lesser moons of Saturn, Mimas, has been largely viewed as a boring lump of ice. But a new discovery has suddenly turned this moon into hot property: its rotational wobble turns out to be far stronger than expected. Mimas is almost perfectly spherical, so a robust wobble implies that something intriguing is going on below its surface…  and that something is very likely to be sloshing. The most likely explanation for the wobble would be an internal ocean starting between 24 and 31 kilometers below the moon’s surface.

This would be something of a puzzle in a moon as small as Mimas — how could a liquid ocean remain warm enough for billions of years? One possibility is that the elliptical orbit of Mimas creates tidal friction strong enough to maintain a warm core.

What sort of tentacular horrors could we discover inside this Saturn moon? Disappointingly, it took 1.2 billion years for Earth life to develop sexually reproducing, multicellular life,  and more than 3 billion years to develop amphibians and reptiles, which would be super cool to find in the depths of an alien moon.

Mimas has a diameter of less than 250 miles. It is minuscule compared to Earth’s 7,900 mile diameter. So it may seem that its odds for developing complex life are microscopic. However, if the entire core of the moon turns out to be a warm incubation chamber, it means that the volume of liquid where chemical reactions leading to possible biogenesis is huge — far larger than the combined size of tidal pools of ancient Earth, where first cells are supposed to have developed.

Perhaps the lukewarm, soupy interior goulash of Mimas is an optimal place to breed life. Then the big question would be how complex such life can develop in absence of sunlight. Is there enough thermal energy to allow multicellular organisms to develop and thrive? Of course, discovering even the simplest prokaryote inside Mimas would be the most important scientific discovery of the century, so maybe it’s churlish to hope for the discovery of wise and melancholy squids. Who would worship us as angels until they discover what is the most popular appetizer in New York.

In any case, the big challenge is now to develop and fund an exploration project capable of drilling down 16 miles into the surface of Mimas. This may be a challenge for Elon Musk’s grandchildren.