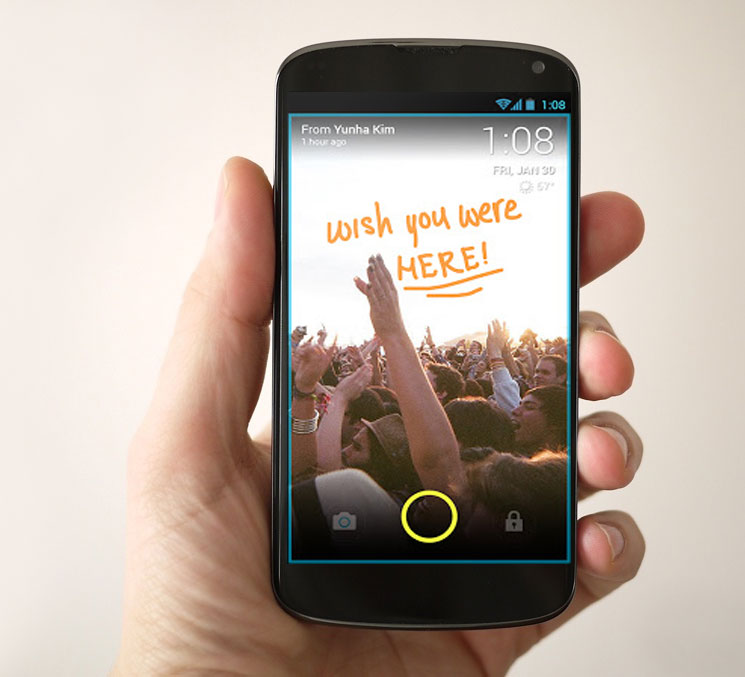 Locket, the maker of a killer app that was included in Google’s list of the best apps of 2014, just unveiled a brand-new messaging app for Android that aims to make sharing your pictures an absolute snap.

DON’T MISS: Brilliant-but-scary iOS app can 3D print a copy of any key you have a picture on

The app lets you take pictures and share them immediately with friends and also select pictures to share from the phone’s gallery app (although in such a case, the app will still require a password to be entered before accessing those photos). Furthermore, users can also add emojis, doodles and captions to the images they share.

“Imagine every time you check your phone, you are seeing notes and photos from your friends right there on the lock screen. As long as you are using the phone, you can’t miss it,” Locket CEO and co-founder Yunha Kim said.

Sure, some people may argue that placing such an app on the lock screen of a smartphone sort of defeats the purpose of protecting a device with a password in the first place, as the lock screen should prevent others from accessing private information exchanged via apps, including the contents of messaging applications.

On the other hand though, the app could be used as a simple way of sharing pics without requiring the user to find a more complex chat app to do it.

Photos sent to friends remain on their screens until they unlock them. That means, just like in Snapchat, friends can’t save the images you share with them, though they can save screenshots. A future version of the app might include a feature that alerts the sender that a screenshot has been taken.

The application is available as a free download from the Google Play Store (see this link). A video showing it in action and the full press release follow below.

SAN FRANCISCO – Locket, the company behind one of the most innovative lock screens, is launching ScreenPop, a brand new way to quickly share with your friends. ScreenPop allows any Android users to quickly snap a photo and send it directly to their friends’ lock screens, with no need to open an app.

ScreenPop reimagines the way we communicate by connecting your messages with the real estate we check 110 times per day – our smartphone lock screens. Locket has raised $3.2M from investors including Tyra Banks, Turner Broadcasting Systems and Great Oaks Venture Capital. Locket is an award-winning team featured on “Google’s Best Apps of 2014.”

“Imagine every time you check your phone, you are seeing notes and photos from your friends right there on the lock screen. As long as you are using the phone, you can’t miss it.” says Yunha Kim, the company’s CEO and co-founder. In fact, the idea of ScreenPop was inspired when Kim observed a teenager receive so many photos and messages from various apps that she wasn’t bothering to open.

With ScreenPop, users can add emojis, doodles, and captions to every photo. Photos sent to friends on ScreenPop only last until users swipe to unlock their phone.

Results from the beta launch showed that many ScreenPop users were sending over 40 photos per day. One user testimonial from David, a 16-year old avid ScreenPop user, reads “It’s like Christmas every time I check my phone.”

You can download ScreenPop for free from Google Play. ScreenPop is launching their new app with a Valentine’s contest encouraging users to ask out their crush on the lock screens. Details can be found on the ScreenPop twitter.

About Locket
Locket is a San Francisco-based company that reimagines the smartphone lock screen.
ScreenPop builds on top of the success of Locket, which has been selected as one of the “Best Apps of 2014” by Google.