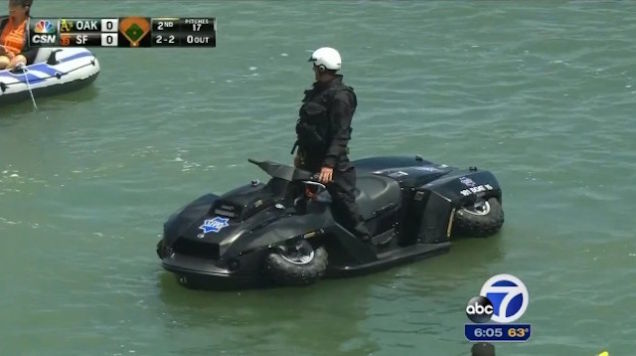 Yes, that’s a police vehicle in the image above and it’s one of three such contraptions the SFPD has in its fleet of vehicles. We’re not looking at some mini version of a Batmobile or anything crazy like that. Instead, it’s a quadski that lets cops chase criminals both on land and on the water without switching vehicles.

The amphibious machine is a curious contraption that probably won’t be useful most of the time. After all, how many times will officers find themselves in pursuit of a suspect on land and then at sea? Well, if the bad guys also have access to quadskis, then that’s definitely one police chase you’d want to see on TV.

Quadskis could help save someone’s life though, as they could give authorities faster access to people who are drowning in the water.

As Gizmodo explains, each quadski costs $50,000 but the SFPD didn’t buy its three vehicles with your money. Instead, police received them as a donation from Saleforce.com CEO Mark Benioff.

The following video shows you a quadski in action — and yes, you have to watch it even if you watched the crew from Top Gear get to ride one last year.