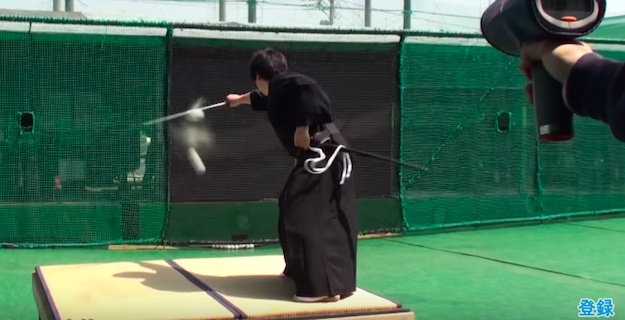 Case in point: this incredible video depicting a man slicing a baseball clean in half with a samurai sword. What makes the video so remarkable is that the baseball is travelling at 101 mph, about as fast, if not faster in most cases, than most fastballs thrown in the major leagues.

Even more astounding is that man in the video, a fellow named Isao Machii, is standing just 30 feet away. By way of comparison, batters in the major leagues stand 60 feet away from the pitcher’s mound.

Now the normal time it takes a major leaguer to react to a pitched ball thrown at 100 mph is .380 seconds. And along comes Machii who can react even quicker to a ball coming at him from half the distance.

Sure, it all sounds incredulous, and your first instinct might be to decry the video a fake. But before you do so, we should point out that Machii is reportedly a “master of Iaido, a modern martial arts application of traditional Japanese swordplay that emphasizes the movements associated with the form.” He also just so happens to hold the Guinness World Record for the fastest 1,000 martial arts sword cuts.

Since the video went up on Tuesday, it has already amassed over 3 million views on YouTube alone.

And lest you think this is Machii’s first rodeo, here he is cutting a BB gun pellet in half as it’s fired.