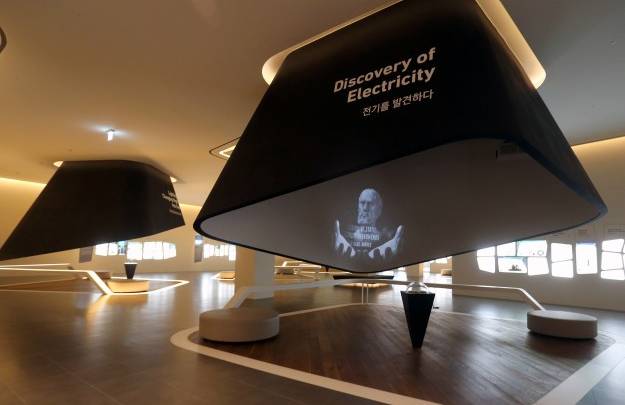 If there’s one thing in the world that is guaranteed to drive Samsung crazy, it’s alleging that the company isn’t innovative. And now Samsung is going yet another step in its quest to shed its copycat image by opening up a new “Samsung Innovation Museum” at its Samsung Digital City complex in Suwon, Korea that shows us all of the major innovations of the last couple of centuries, from the invention of the lightbulb to Samsung’s innovations in display technologies.

“Wait a minute,” you say. “Samsung can’t really be putting its own innovations on par with those of Thomas Edison and Samuel Morse, can it?”

Actually, yes it can. In its press release touting the new museum, Samsung proudly says that the museum “features original inventions from Thomas Edison’s light bulb and Samuel Morse’s telegraph to the latest cutting-edge discoveries,” which just happen to be Samsung’s own innovations that get their own dedicated exhibits. Other innovators who have the honor of being compared to Samsung include Alexander Graham Bell and Michael Faraday.

Samsung doesn’t mention in its press release whether any of the “latest cutting-edge discoveries” will include any Apple, Google or Microsoft products, but we get the feeling that the chances of those appearing aren’t good. After all, other than building the world’s most-used desktop operating system, the world’s most-used search engine and releasing groundbreaking smartphones and tablets, what have any of those companies ever done that’s on par with Samsung?

(Though to be fair, as 9to5Mac points out, Samsung does give Apple a grudging tip of the cap by giving the decades-old Apple II its own exhibit.)

Samsung Electronics opened the Samsung Innovation Museum (S/I/M) dedicated to exploring the past, present and future of the electronics industry, located in Samsung Digital City in Suwon, Korea. Visitors to the museum can experience the rich history of electronics from the earliest electrical creations of Michael Faraday, Thomas Edison and Graham Bell, as well as glimpse into the future to learn about innovations to come.

“The Samsung Innovation Museum brings together some of the true historical masterpieces of electronics innovation. These inventions laid the technological foundation that allowed us to develop and refine products that enhance lives today,” said Oh-Hyun Kwon Vice Chairman and CEO of Samsung Electronics at the official opening. “The museum gives visitors an opportunity to see where we’ve come from and also see where Samsung draws inspiration from to continue to create category defining products.”

The 10,950 m2 five-story museum is divided into three exhibition halls to mark the past, present and future of the electronics industry. In Halls 1 and 2, visitors can learn about more than 150 historical items while Hall 3 exhibits current and future innovation. Each hall has information about each product as well as videos specially created to provide added context.

Exhibition Hall 1: The Age of Inventors

Exhibition Hall 1 tells the story of the dawn of the electronics industry between the 18th and 20th centuries. The exhibition showcases some of the most innovative and historic inventions by Michael Faraday, Thomas Edison and Graham Bell. The hall is divided into five areas: discovery of electricity, lighting, telecommunications, home appliances and radio. Each area is separately housed within a cone-shaped roof hanging from the ceiling.

The original models of the following break-through innovations are exhibited in Hall 1:

Visitors can watch videos that introduce how these five historic inventions improved our lives from the screens inside the cones. The hall also illustrates detailed company histories for pioneers in the industry: Siemens (established 1847); AT&T (1885); Philips (1891); GE (1892); and, NEC (1899).

This hall consists of three zones that provide insight into the key pillars that underpin the electronics industry: Semiconductor, Display and Mobile. The advent of semiconductors enabled high speed information processing and the development of displays and mobile communications continue to contribute to making information accessible and ubiquitous.

Visitors can learn about technology landmarks such as the invention of the transistor, the development of integrated circuits, the history of the semiconductor, and the evolution of display technology. The Mobile zone features the world’s first mobile phone as well as the world’s first smartphone. There are also examples of how Samsung’s innovation in telecommunications has benefited those around the world such as the time when Samsung loaded a GT-i7410 projector phone with encouraging messages and video clips to boost the morale of the 33 Chilean miners trapped underground for 69 days in 2010.

Located in Hall 2 alongside Samsung products are those created by other leading businesses that have advanced modern society such as Intel, Sony, Sharp, Nokia and Motorola.

There is also a S/I/M lab where children can learn how about semiconductors, displays and mobile communications.

Exhibition Hall 3: The Age of Creation

The final hall showcases Samsung Electronics’ vision for the future and also displays its most advanced technology. This hall is divided into three areas: The S/I/M Theater, the Product Gallery and the Samsung the nanum gallery.

The S/I/M Theater features a 180-degree UHD panorama screen where visitors can learn about Samsung’s commitment to innovation and building a better future.

The Product Gallery explores the future of society that Samsung envisions through its leading innovations, ranging from B2B solutions to the latest world-class products such as the Curved TV and Smart Home services. The B2B zone is divided into seven sections: Retail, Healthcare, Hospitality, Government, Finance, Enterprise Mobility and Education. Each B2B section showcases Samsung’s range of B2B products and solutions that visitors can interact with and experience first hand.

Located on the first floor of the S/I/M is the Samsung History Hall that talks specifically about Samsung’s corporate philosophy and history of innovation. Visitors can learn about the beginnings of the company, the challenges that have been overcome, and the “New Management” company ethos that successfully transformed the company and, by extension, the electronics industry.

The Samsung Innovation Museum will be open from 10 a.m. to 6 p.m., Monday to Saturday. Visitors on weekdays must make a reservation in advance at samsunginnovationmuseum.com but there is no need to make reservations for Saturday visits.