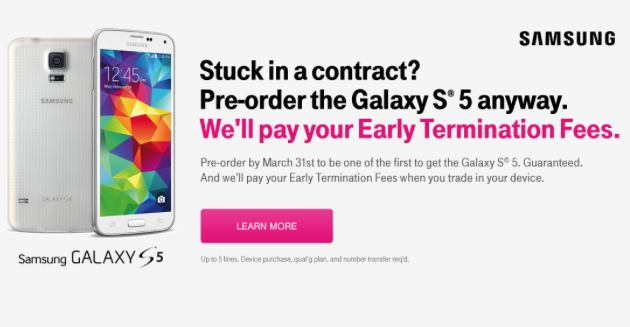 One of the many new features in the Galaxy S5 is something called Download Booster that Samsung says is “an innovative Wi-Fi technology for boosting data speed by bonding Wi-Fi and LTE simultaneously” that allows you to download data from two different connections at once. However, this cool new technology only works if your wireless carrier allows you to use it over their network and FierceWireless reports that Verizon, AT&T and Sprint have all disabled the feature on their versions of the Galaxy S5, which means you can use either LTE or Wi-Fi to download files onto your phone but you can’t use both at the same time.

There is, however, one major American carrier that is not only allowing Download Booster on its version of the Galaxy S5 but is even touting it as part of its big Galaxy S5 promotion: T-Mobile. As FierceWireless notes, the “Uncarrier” has “highlighted the download booster in a Feb. 24 press release announcing that the S5 would be available from both T-Mobile and its MetroPCS business” and also “touts the feature on its S5 landing page.”

So if you’re interested in buying a Galaxy S5 and you really want to see its Download Booster in action, it looks as though T-Mobile is your best bet as far as nationwide wireless carriers go.