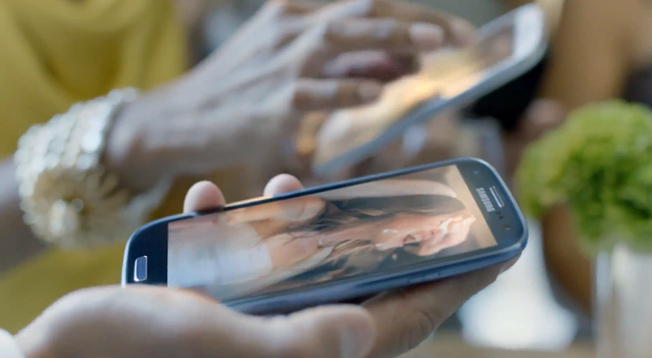 As if the task of competing with Apple’s (AAPL) new iPhone 5 isn’t daunting enough, Samsung (005930) has chosen an interesting approach to promoting its flagship Galaxy S III smartphone in the U.S. that inadvertently brings a new rival into the mix: Facebook (FB). As dominant as Apple is in the mobile industry — the company accounted for 77% of all mobile industry profits last quarter — Facebook is equally in command of the social space. But nevertheless, Samsung’s recent promotional efforts in the U.S. take aim squarely at one of Facebook’s key features.

The handset’s continued success relies on a number of factors, however. Ongoing support from carriers’ in-store sales staff is always important, but marketing and advertising obviously play a huge role in generating consumer awareness and interest.

In Samsung’s most recent ad run for the Galaxy S III, the company focuses on one feature in particular. Dubbed “Share Shot,” the nifty function creates a series of Wi-Fi Direct connections that allow users to instantly and automatically share photos they take with their friends who are nearby. The feature requires a Galaxy S III be used on both sides of the connection — sending photos and receiving photos — but it will be included in additional Samsung phones set to launch later this year.

Here is one of Samsung’s recent television commercials showcasing the feature:

Share Shot can be a bit tricky to set up at first, but in my tests it worked well on Samsung’s Galaxy S III. All else aside, however, the question remains: Is Share Shot the answer to a question no one is asking?

Facebook is currently home to nearly 1 billion active users each month, and photo-sharing is one of the monstrous social network’s key features. Users love sharing photos and, perhaps even more so, they love commenting on each other’s photos. How important is photo-sharing to Facebook users? So important that the company decided to spend nearly $1 billion to acquire Instagram and further bolster its photo-sharing portfolio.

Now, whether or not Samsung intended to compete with Facebook, Share Shot is direct competition with Facebook’s photo-sharing features and with Instagram. The problem, however, is that while Share Shot is technologically far more advanced than anything Facebook offers, it is far less social.

When users share images via Share Shot, each of their nearby friends (who use a compatible device and who have configured the feature) will instantly receive a copy of each image taken on his or her phone. It has been shared. This means that if the user decides to share a photo later using Facebook or Instagram, it is no longer novel for friends who had previously used Share Shot.

Photos shared using Share Shot are also only visible to those users in close proximity to the source phone. No other friends can see these photos unless they are re-shared on a more widely available network. Share Shot also doesn’t support commenting — and we all know how much people love to comment on photos — or re-sharing without the use of a third-party app.

In the end, Share Shot is a social feature that isn’t very social at all.

Share Shot is by no means a useless feature, though. It is an example of an area where Samsung is trying to add value and differentiation, and for some users, it may indeed be compelling. Samsung’s focus on the feature in recent ads is part of a bigger issue, however: Samsung is not always good at telling people why they should buy Samsung phones.

Samsung is doing a great job of building phones that carriers want and that consumers want. It sold more than 50 million smartphones into channels last quarter and it had a formula that was really working. But that formula seemed to involve saturating the market with models of all shapes more than it involved creating strong differentiated experiences.

In a recent interview, however, Samsung’s marketing boss pointed out that the company is hoping to change that. “Especially in U.S., people are obsessed with Apple,” Samsung’s Younghee Lee said earlier this year. “It’s time to change people’s attention.”

Samsung is moving in the right direction. Its latest flagship phones like the Galaxy S III and Galaxy Note II indeed offer unique features that cannot be found elsewhere. Now, finding a way to communicate the right features to the right audience looks like it will be Samsung’s next big challenge if it hopes to see continued success once carriers’ attention begins to shift elsewhere.