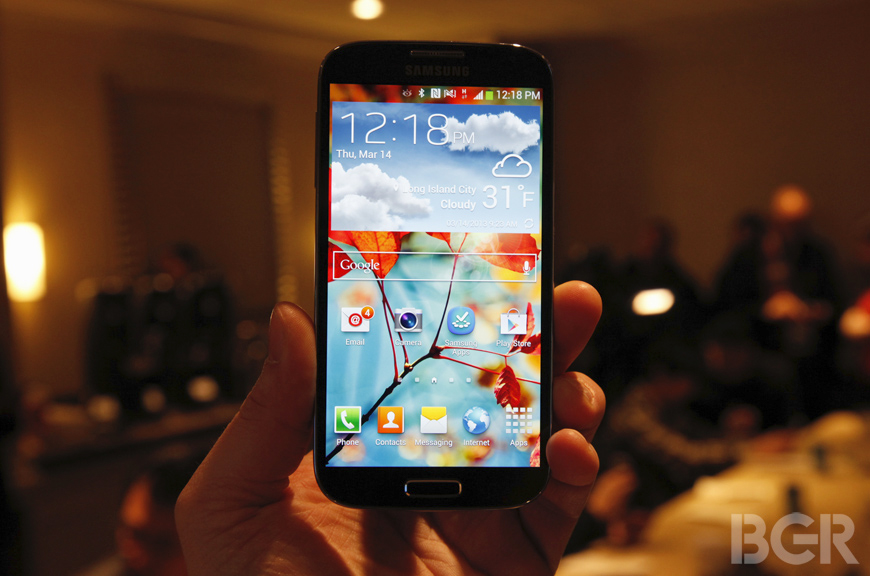 The king of Android phones is dead, long live the king. Samsung (005930) has taken the smartphone market by storm over the past few years, emerging as the clear leader in the Android smartphone race thanks to the Galaxy S III. The company is the only serious rival to Apple’s (AAPL) iPhone empire in terms of profits and shipment volume, and it is now the top-selling cell phone vendor in the world. Led by the flagship Galaxy S III, which has sold more than 40 million units globally, Samsung’s Galaxy lineup has muscled every other Android vendor out of the spotlight. Now, the company is looking to extend its lead with the brand new Galaxy S 4.

Expectations leading up to Thursday’s Galaxy S 4 unveiling couldn’t have been higher as Samsung managed to keep its impossible promise and engineer Apple-like anticipation for its new flagship phone. Was it worth the wait? Put plainly, if you thought the Galaxy S III was impressive, the next-generation model is going to blow you away.

Samsung’s new smartphone bests its predecessor in nearly every possible way, from the display and the 13-megapixel camera to the software and unique features introduced alongside the latest version of TouchWiz. The Galaxy S 4 the Android smartphone by which all others will be judged in 2013.

The first thing I noticed when I picked up the new handset during a meeting with Samsung earlier today was probably the only real qualm I have with this phone. While the Galaxy S 4 is thinner and a bit more sleek than the Galaxy S III, it’s also lighter and it feels even less like a high-end device.

Samsung made sure to repeatedly specify that the Galaxy S 4’s case is made of polycarbonate, not just any old plastic, but it still feels very cheap. In this regard, the Galaxy S 4 doesn’t hold a candle to devices like the HTC (2498) One or Apple’s iPhone 5.

Luckily for Samsung, tens of millions of people didn’t seem to care about the feel of the Galaxy S III thanks to its numerous strengths, and the same will likely be true with the Galaxy S 4. Besides, the build quality is quite good aside from the feel and the moment you tap the unlock button to turn on the Galaxy S 4’s display, you forget all about its light plastic case.

It’s difficult to state this conclusively since I only spent about 15 minutes with the handset, but it very well might have the best display that I’ve ever seen on a smartphone. It’s stunning. The the contrast and color depth on this 5-inch, full HD Super AMOLED panel are shocking. And with a pixel density of 441 ppi, the clarity is better than any other Samsung display on the market. The end result is a smartphone that I simply couldn’t look away from — except when I was testing Smart Pause.

Samsung’s version of Android 4.2.2 Jelly Bean has been heavily customized and there are a host of intriguing new features. The most novel among them utilize touch-free controls, though the smartphone does not include any eye-tracking capabilities despite earlier reports.

Smart Pause, which I mentioned above, uses facial recognition to take note when the user is paying attention to media playing on the handset’s display. When the user turns his or her face away from the screen, the phone’s front-facing camera sees this and automatically pauses media playback.

A related feature is Smart Scroll, which was mistakenly reported as a function that makes use of eye-tracking technology. With Smart Scroll enabled, the Galaxy S 4 will recognize when the user is looking at the device and reading content. The user can then tilt the phone forward or back to scroll up or down. Samsung said that eye-tracking technology simply isn’t accurate and reliable enough for a function like this.

Another nifty new feature is Air Gestures, which can perform a number of tasks. A waving gesture in front of the display lets the user flip through songs or images, or even answer a call without touching the phone. Functions like these are great for when you’re driving a car and the phone is in a dock.

Air View, the hovering feature that was introduced with the Galaxy Note II, is also present on the Galaxy S 4 — the main difference being that the S Pen stylus is no longer needed. Simply hover a message or thumbnail with a finger and a preview will pop up on the display.

And thankfully, there is now a new page on the drop-down notifications pane that groups all of these unique new TouchWiz features on one page with toggles to enable and disable them.

The camera software on the Galaxy S 4 has been completely retooled compared to the Galaxy S III’s camera. In fact, it’s the same software that powers Samsung’s Galaxy Camera. There are tons of new features to enjoy such as Dual Shot, which captures photos with the front and rear cameras simultaneously and combines the two images; Sound & Shot, which adds up to nine seconds of audio to a still image; and Cinema Photo, which captures a video and lets the user select which areas should be animated and which should be still, resulting in a GIF where only select portions of the image are animated.

The last new features I’ll cover in this preview should be of particular interest to companies like Jawbone and Fitbit. With the Galaxy S 4, Samsung is launching an all-out attack on the fitness accessory industry. The company’s new S Health suite of apps makes use of a pedometer to track steps, an accelerometer and gyro sensor to track activity, humidity and temperature sensors to track environment, and an integrated food-tracking app that lets the user monitor caloric intake.

If sensors are the next big thing, Samsung just got a serious jump on the competition.

I found the Galaxy S 4 to be very responsive during my tests, thanks no doubt to the 2GB of RAM and the eight-core processor that powers the phone. Samsung’s Exynos 5 Octa chipset seemed to handle anything and everything I could throw at it, though the phone was running pre-release software and I did hit a few snags with the front-facing camera not recognizing gestures right away. This is something that will hopefully be ironed out by the time the phone launches.

It’s also worth noting that the U.S. version of Samsung’s Galaxy S 4, which will be available on every major carrier as well as several regional carriers, is powered by a quad-core Snapdragon chipset rather than Samsung’s in-house eight-core chip.

The Samsung Galaxy S 4 will launch in the U.S. sometime in the second quarter at an unspecified price, and BGR will have a full review of this sleek new smartphone in the coming weeks. In the meantime, be sure to check out the full specs, our hands-on photo gallery and our live coverage of Samsung’s Galaxy S 4 press conference, which is still underway.