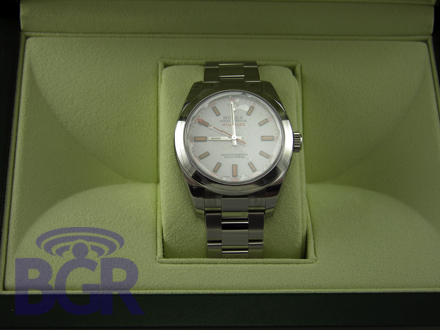 Rolex came out and introduced a new Oyster Perpetual Milgauss Reference 116400GV, available in black and white dials a short time ago. You might be thinking, “Why are they posting a Rolex here?” And the answer is: the mechanics behind the watch. As the Milgauss name indicates, this time piece is resistance to a magnetic flux density of 1000 Gauss. Its achieved via its Parachrom-Blu hairspring which is completely unaffected by electro-magnetic forces. The retro watch uses the 3131 movement encased in a soft iron known as a Faraday Cage. The movement is also protected by 2 non-ferrous covers, and is supplied in a 40 millimeter “Oyster” case attached to their new twin lock two-tone bracelet. What really sticks out is the white dial accentuated by orange markings that also has the same 1950’s Milgauss-style lightning bolt as the second hand. You’ve also got the standard scratch-proof sapphire crystal and water resistance to 100m. So why do you really need a watch like this? Well, if you happen to wok in an environment with strong magnetic fields such as an electrical power plant, a Physics lab, a medical imaging facility, or heck, even the BGR offices, this watch won’t fail you by speeding up, and then needing demagnification. Retailing for approximately $6000 USD, but currently fetching significantly more on the open market, this is going to be one sought after piece. Hit the link for all the photos!