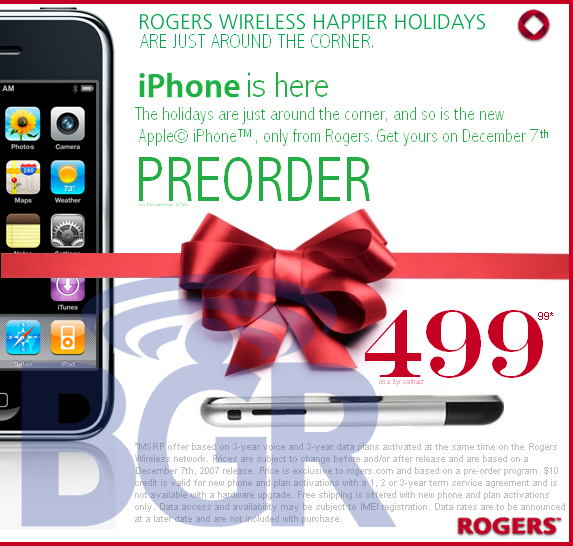 You know what they say…if it seems too good to be true, it probably is! And that seems to be the case with the “leaked” Rogers ad we ran showing the iPhone making its way up north to Rogers on December, 7th. Rogers spokesperson Odette Coleman has issued the following statement: “The ad in Boy Genius, Mashable, Engadget blogs was not produced by Rogers. Nothing further to announce on iPhone.” Our favorite part of the article though, is this…

“So it looks like the ad was either made by a fanboy trying to milk the iPhone news here in Canada, or it was made by an advertising agency for Rogers.” “Roger’s execs promised a “device” announcement in November, a December date could jive with those promises. The leaked ad sure looks real. It promises a pre-order for the phone on Roger.com on November 20, so you can buy one before Christmas and get it in January.”

Oh well, there you have it! It started here, and ends here — no iPhone confirmation on Rogers, yet.