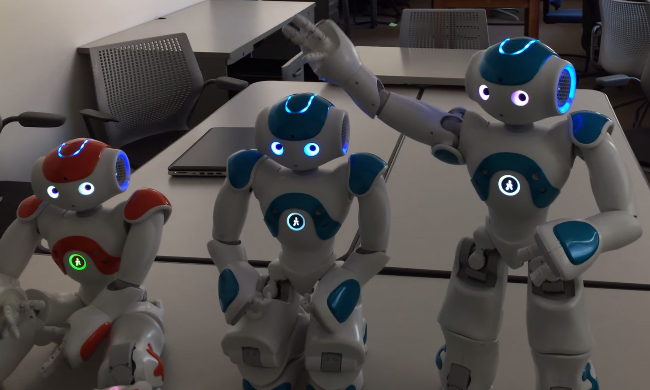 Scientists have just made a robot that has demonstrated self awareness during a particular test, but that doesn’t mean Judgement Day is coming. We’re probably a long way from having to defend our race against robots, as the men behind the machines have one gigantic hurdle to overcome: Making robots realize they exist continuously.

In 2005, Luciano Floridi issued a challenge to scientists in the world to prove that robots can display the human trait of self-awareness with the help of a game — the so-called “wise man” test, that only humans could perform.

The riddle says three wise advisors are coming to see a king and each of them are wearing hats that they themselves cannot see. The king informs them of three facts: the contest is fair, the hats are blue or white, and the first one to deduce the color will win. A human would see the hats on the other two persons, assess the fact the contest is fair and conclude that his hat has the same color.

A robot managed to beat a variation of this test (see video below).

However, scientists must now overcome the next big challenge, and that’s having a robot continuously realize it exists. That sort of behavior requires programming and math so complex we don’t even know how to product it yet, as the roboticist told Business Insider.

“Think about a self-driving vehicle for a moment, say one that’s been built by Uber or Apple or Google,” Bringsjord said.

“Three people get into it, and they’re all talking at the same time. If the AI doesn’t understand who’s talking and that it’s not him or herself talking — but only recognizes when itself speaks — there is no way to engineer a system that would be able to understand this conversation that good old fashioned taxi drivers have no trouble with. That is unless the driving AI has a concept of itself versus its occupants.”

In other words, the first thing a Terminator needs to do before hunting for Sarah Connor and her son is to realize it exists on a constant basis and have real-time self-awareness. Until that happens, we’re probably safe from Skynet-like dark futures.