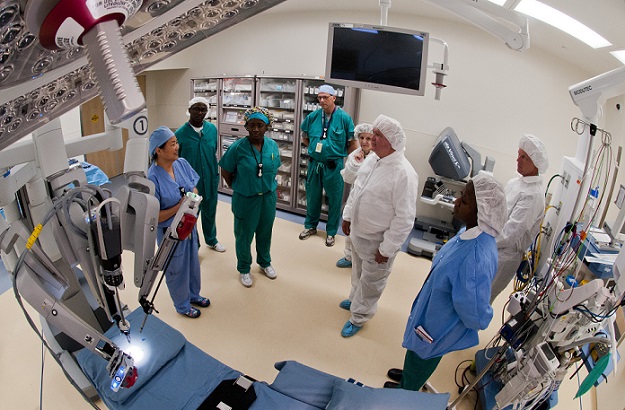 Anyone who has either gone under the knife or who has had someone close to them go under the knife can readily attest that the entire surgical process is harrowing. Even when the primary objective of an operation goes smoothly, the risk of problematic complications always looms overhead.

It’s no exaggeration to state that the well-being and long-term prognosis of patients on the operating table has an awful lot to do with the skills of the surgeon overseeing the given procedure. Which, of course, is why medical students wishing to become surgeons must complete a seemingly endless amount of schooling and unbelievably rigorous on-the-job training.

Needless to say, being a surgeon is an incredibly taxing and demanding profession. But what if surgeons of the future aren’t highly skilled and extensively trained humans? Instead, imagine a world in the not too distant future where human surgeons are replaced by robots.

DON’T MISS: Confirmed: Apple is making only one, very dumb change to the iPhone this year

Sound crazy? Sure, at the surface. But new research suggests that advanced robots may one day be better geared towards performing complicated surgical procedures.

Writing for The Week, Erin Blakemore explains how a a team of researchers (a group which includes practicing surgeons) have created a new robot dubbed STAR which can outperform surgeons in the operating room.

In practice trials performed on pig intestines, the researchers found that STAR’s surgical results “were more consistent and had fewer mistakes” than its human creators.

As for what makes STAR tick, the robot has three main components: a force sensor for determining how much pressure to apply, a vision sensor so that it knows where cuts and other actions need to be made, and an advanced algorithm to tie everything together.

“The algorithm,” Blakemore writes, “interacted with the robot’s 3D imaging system and used sub-millimeter positioning capabilities to hone in on tight spots and create a suture plan with just the right needle depths and sewing forces.”

One way the robot beats humans is by doing the same thing every time. Since it draws on best practices, it’s sure to use the most cutting-edge or appropriate techniques — a leg-up on surgeons who either don’t have experience with a certain procedure or who have outdated knowledge. And unlike humans, it never forgets basics or gets distracted.

Notably, one of the surgeons involved in the development of STAR makes a point of noting that robots aren’t going to replace surgeons in the OR anytime soon but are rather intended to “enhance the capacity and capability” of surgeons during complex procedures.

As for the future? Well, a research paper on STAR notes that “the operating room may someday be run by robots, with surgeons overseeing their moves.”