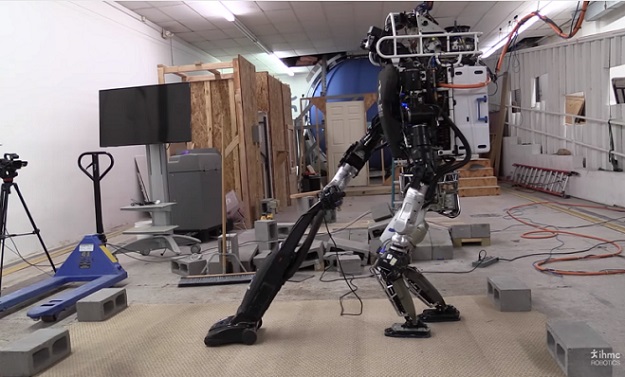 The Florida Institute for Human and Machine Cognition (IHMC) didn’t let their second place finish at the DARPA Robotics Challenge slow them down in the slightest. Recently, the team has been busy giving its million-dollar robot ATLAS some new and practical skills: The ability to do chores.

The ATLAS robot, which was built by Boston Dynamics with the algorithm supplied by IMHC, can move around boxes, fold up a ladder, vacuum, sweep, gently pick up empty coke bottles and toss them in the trash, and a whole lot more. Remember the robot maid from The Jetsons? Well a world where those type of robots become a reality may be a lot closer than you might have otherwise thought.

Note that the video below is sped up by a factor of 20x, which is to say that these aren’t the most efficient robots. Nonetheless, it’s still quite impressive to see what they can do.

We should note, though, that the ATLAS robot here isn’t operating completely autonomously. Rather, it’s being controlled in part by IHMC’s John Carff.

In an interview with IEEE Spectrum, Carff explains:

Most of the stuff in this video is controlled by me, but in a co-active way. I’m not simply sitting there with a joystick teleoperating the robot: I tell the robot through the UI that I want to grab a bottle off the table by clicking the bottle and making sure that the resulting hand is in the correct place. Then, the robot tells me how it’s going to move its entire body to reach that location, through a preview in the UI. If I’m okay with the plan the robot has come up with, I tell it to execute that motion. In the future, I can see a lot of what was done in this video moving more to the autonomous side, but I always see there being a human in the loop.

Interestingly, Carff said that the most challenging chore for ATLAS involved using the pallet jack. Make sure to hit the source link below for Carff’s full interview and a more detailed explanation as to what goes on behind the scenes to ensure that ATLAS keeps running smoothly.