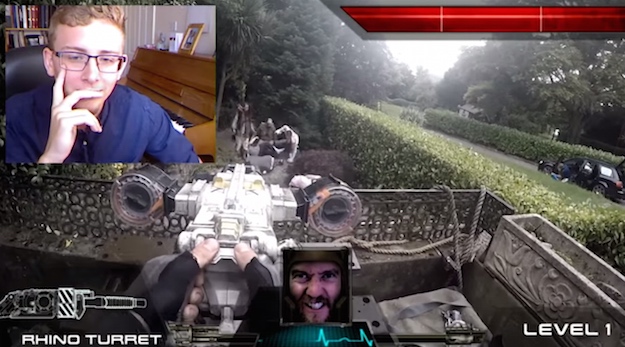 Hold on to your hats because this video is absolutely incredible. Realm Pictures, a UK-based film studio with a flair for narrative storytelling, created a live action zombie-based first person shooter and then invited unsuspecting Chatroulette, Omegle and Skype users to control the action from afar. All the while, a team of actors working alongside a team of tech producers pulled off what can only be described as video magic that has to be seen to be believed.

The amount of work, and fun, that must have gone into making this seemingly kooky idea an awesome reality must have been immense. It all paid off, though, because this video is an absolute gem. And make no mistake about, almost all of the effects the random Internet-goers are looking at are happening in real time.

Without question, the folks behind this video production really did a great job of capturing the look and feel of your everyday FPS. Of course, it’s also entertaining to observe the pure delight unsuspecting Internet users experienced when they were surprisingly pulled into an entirely different world for a few minutes.

In conjunction with the above video, Realm Picutres put up another video which provides a behind the scenes look into the type of work and production that went into making this ambitious effort a reality. In addition to the logistical challenge of getting everything set up and properly coordinated, the technical solutions the team came up with are pretty interesting. All in all, it’s a pretty fascinating look into an A+ production that, dare I say, is as interesting as the final product itself.