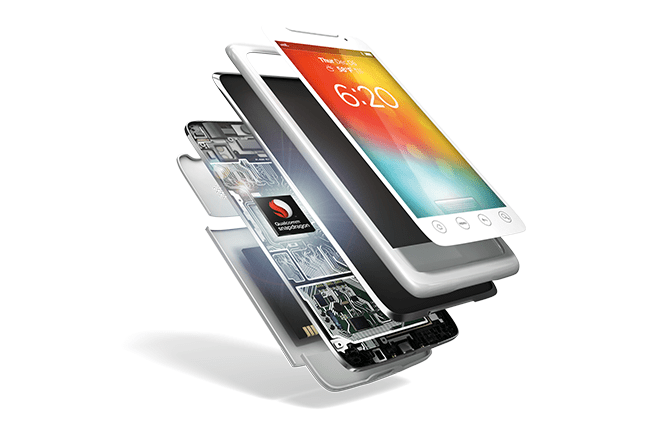 Qualcomm on Monday announced that its flagship 64-bit mobile processors will arrive next year, when they should equip various smartphones and tablets from Qualcomm partners — especially high-end models. The company introduced two new processors that will be part of the Snapdragon 800 family, including the Snapdragon 810 and 808, which will become the company’s “highest performing platform to date,” and will be optimized “for exceptionally low power consumption that does not sacrifice performance.”

Both processors are built on 20 nanometer technology, and will be able to offer Cat 6 LTE Advanced support for data speeds of up to 300Mbps.

The Snapdragon 808 processor will be slightly inferior, being designed for WQXGA (2560 x 1600) displays, and will have a dual-core ARM Cortex-A57 cluster paired with a quad-core Cortex-A53 CPU, Adreno 418 GPU that delivers 20% faster graphics than the Adreno 330 and support for LPDDR3 memory.

The two processors will be available commercially in the first half of 2015, after beginning sampling in the second half of 2014.

Both the Snapdragon 810 and Snapdragon 808 processors integrate Qualcomm Technologies’ 4th Generation Cat 6 LTE Advanced multimode modem together with support for the Qualcomm RF360™ Front End Solution, and support 3x20MHz Carrier Aggregation, enabling speeds of up to 300 Mbps in the broadest set of spectrum deployment configurations to date. Both processors are designed in 20nm technology node with Cat 6 LTE, advanced multimedia features and 64-bit capability, all tightly integrated and optimized for exceptionally low power consumption that does not sacrifice performance, making them the first premium-tier 64-bit processors to enable LTE Advanced globally with a single design. These products underscore Qualcomm Technologies focus on 64-bit leadership, accelerating its availability across all product tiers while maintaining a long-term commitment to the continued development of its own next-generation custom 64-bit CPU microarchitecture, with more details expected to be shared later this year.

Designed for WQXGA (2560×1600) displays, the new Adreno 418 GPU provides support for OpenGL ES 3.1 plus hardware tessellation, geometry shaders, programmable blending. It is designed to support up to 20% faster graphics performance than its predecessor, the Adreno 330 GPU. The Adreno 418 GPU also enables a new level of GPU security for secure composition and management of premium video and other multimedia.
Configured with two ARM Cortex-A57 cores paired with a quad Cortex-A53 CPU.
12-bit dual Image Signal Processors.
LPDDR3 memory.
Frame buffer compression and external 4K display support via HDMI1.4.
“The announcement of the Snapdragon 810 and 808 processors underscore Qualcomm Technologies’ continued commitment to technology leadership and a time-to-market advantage for our customers for premium tier 64-bit LTE-enabled smartphones and tablets,” said Murthy Renduchintala, executive vice president, Qualcomm Technologies, Inc., and co-president, QCT. “These product announcements, in combination with the continued development of our next-generation custom 64-bit CPU, will ensure we have a tremendous foundation on which to innovate as we continue to push the boundaries of mobile computing performance in the years to come.”

Except for the historical information contained herein, this news release contains forward-looking statements that are subject to risks and uncertainties, including Qualcomm Technologies’ ability to successfully design and have manufactured significant quantities of Snapdragon 808, Snapdragon 810 processors and next-generation CPU microarchitectures on a timely and profitable basis, the extent and speed to which the Snapdragon platform is adopted, change in economic conditions of the various markets Qualcomm Technologies serves, as well as the other risks detailed from time to time in Qualcomm Incorporated’s SEC reports, including the report on Form 10-K for the year ended September 29, 2013, and most recent Form 10-Q.

Qualcomm Incorporated (NASDAQ: QCOM) is a world leader in 3G, 4G and next-generation wireless technologies. Qualcomm Incorporated includes Qualcomm’s licensing business, QTL, and the vast majority of its patent portfolio. Qualcomm Technologies, Inc., a wholly-owned subsidiary of Qualcomm Incorporated, operates, along with its subsidiaries, substantially all of Qualcomm’s engineering, research and development functions, and substantially all of its products and services businesses, including its semiconductor business, QCT. For more than 25 years, Qualcomm ideas and inventions have driven the evolution of digital communications, linking people everywhere more closely to information, entertainment and each other. For more information, visit Qualcomm’s website, OnQ blog, Twitter and Facebook pages.