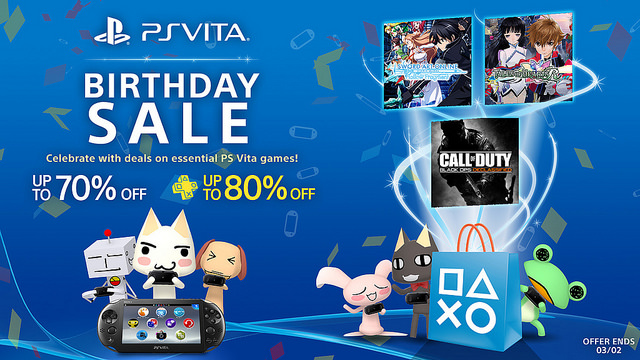 The PS Vita is one of the best portable consoles ever released, but Sony is far too concerned with the continued success of the PlayStation 4 to spend much time focusing on the Vita. Worst of all, Sony has been anything but quick to respond to fans who are worried about the future of the Vita.

This was most clearly illustrated during a short spell where it became impossible to even find a Vita.

DON’T MISS: Here are all the PS4, PS3 and Vita games you’ll get for free in February

It’s still hard to know what the future holds for Sony’s sleek portable, but Vita owners have at least one thing to look forward to: the PS Vita Birthday Sale.

Beginning this Tuesday, Sony will put dozens of the PS Vita’s biggest hits on sale on the PlayStation Store. Regular users will receive up to 70% off eligible games while PlayStation Plus subscribers will be able to pick up games for up to 80% off.

Along with the sale, Sony is also giving away a free Toro and Friends theme, an 8 gold coin pack in Fat Princess: Piece of Cake and a spirit in the free-to-play game Destiny of Spirits.

You can check out the full list of Birthday Sale games on the PlayStation Blog, but here are some of the highlights (with their incoming PS Plus price tags included):