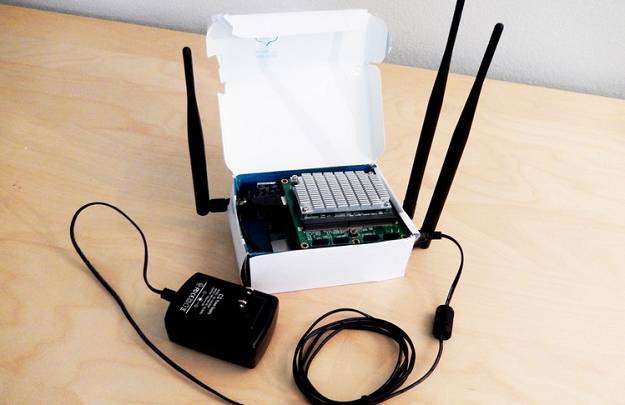 Next month during the Def Con hacker conference in Las Vegas, security researcher Ben Caudill will unveil a potentially game changing device called a ProxyHam. Without question, the promise of ProxyHam should leave proponents of Internet privacy and anonymity beyond excited.

By relying upon a 900 MHz radio connection, Caudill’s device effectively serves as a long-distance Wi-Fi router. Specifically, the ProxyHam can transmit a Wi-Fi connection up to a distance of 2.5 miles in ideal conditions. As a result, even in scenarios where authorities manage to track down a target’s Internet connection, they might arrive on the scene (presumably a location with public w-fi access) only to find a ProxyHam device transmitting a low level signal perhaps thousands of feet away in any direction.

DON’T MISS: A Trillion Dollars Got the Army an F-35 That’s Worse Than the F-16 It Replaces

While a range of technologies (such as ToR) can provide some level of anonymity, a fundamental flaw still exists: a direct relationship between IP address and physical location. If your true IP is ever uncovered, it’s game over – a significant threat when your adversary owns the infrastructure.

To resolve this issue, I present ProxyHam, a hardware device which utilizes both WiFi and the 900Mhz band to act as a hardware proxy, routing local traffic through a far-off wireless network – and significantly increasing the difficulty in identifying the true source of the traffic. In addition to a demonstration of the device itself, full hardware schematics and code will be made freely available.

Speaking to Motherboard, Caudill explained that his device is ideally intended to be used as a complement to other privacy-oriented tools like Tor.

“We consider this the last or worst case scenario,” Caudill said, “the absolute fallback plan if everything else fails.”

As for the device itself, it’s comprised of a Wi-Fi enabled Raspberry Pi computer along with a setup consisting of three antennas. One antenna, naturally, is tasked with connecting to a source Wi-Fi network. The other two antennas work to transmit the Wi-Fi signal at a 900 MHz frequency.

In order to pick up the long-range signal, users will need to plug a 900 MHz antenna into their computer, which will leave your setup looking a little something like this. Not exactly the epitome of mobility, but hey, it seems like a reasonable trade-off to us.

A Wired report sheds some more light on what makes ProxyHam so effective.

To avoid radio detection on the user’s end, ProxyHam’s wireless signals are designed to look indistinguishable from the many cordless telephones that use the same frequency. And Caudill says the rise of more internet-connected wireless gadgets will provide further cover for ProxyHam users over time. “There are a ton of devices jumping into that space and communicating there,” he says. “It’s not feasible to say ‘we’ll chase down everyone who has this device communicating on this frequency.’ It’s a needle in a haystack.”

For instance, some common items that communicate via 900 MHz frequencies include baby monitors and walkie talkies.

As for how ProxyHam might evolve in the future, Caudill tells Motherboard that he and his team are working to make the ProxyHam contraption less conspicuous. Future iterations, for instance, might be small enough as to mimic the outward appearance of a book.

“If you throw this in a library it would take you years to be able to identify it,” Caudill said.

It’ll undoubtedly be interesting to hear more about ProxyHam once Caudill officially introduces the device at Def Con 2015, an event slated to kick off on August 6.