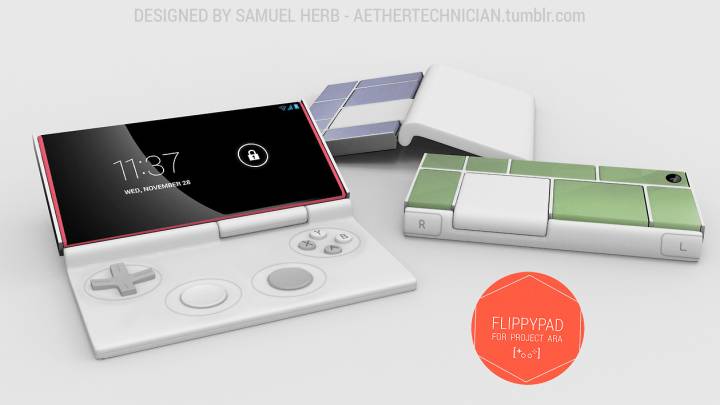 Google’s Project Ara modular smartphone will take the smartphone universe by storm next year and developers have already been given a glimpse at what such devices will have to offer. Module makers will be able to build a variety of smartphone components for Project Ara phones, with a new concept showing what a modular smartphone may bring to mobile gaming. Imagined by The Aether Technician, Flippypad is a game controller concept that snaps into one of the Project Ara’s modules on the back to offer gamers a better way to interact with their mobile games.

“And so, I give you Flippypad! A hinged controller that turns the phone into a neat little clamshell gaming device,” the designer Samuel Herb wrote. “It has an L and R button, a D’Pad, two flat joysticks (similar to the one found on the 3DS) and the familiar ABXY diamond. It’s probably large enough to house a good amount of extra battery too.”

Also interesting is the fact that Flippypad would act as a front cover when the phone is not in use. The controller could be removed and replaced with a different smartphone controller, when a gaming accessory isn’t needed.

Equally important is the fact that the Flippypad module could also pack additional battery juice, which may be used to further increase the battery life of the handset itself.

However, Flippypad is just a concept for now, and Project Ara phones are only expected to be commercially available early next year.