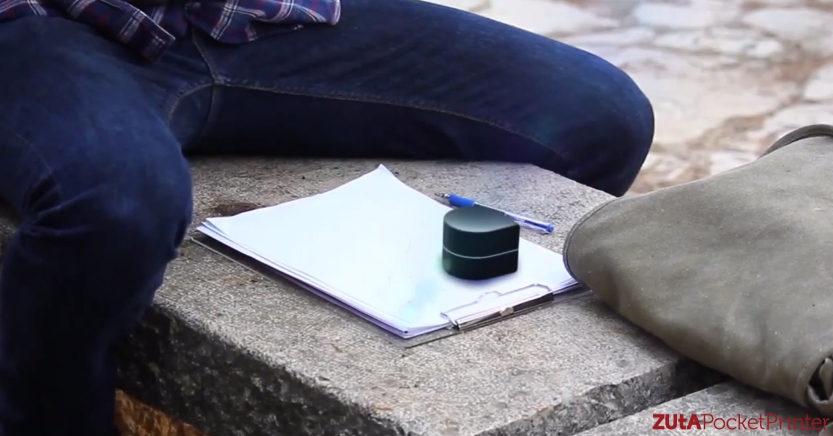 Israel-based Zuta Labs has been developing a very interesting product meant to fix the one thing users can’t do on the go, despite the plethora of features smartphones have to offer: printing. The company already has a working prototype, the Zuta Pocket Printer, and is currently looking to raise $400,000 via Kickstarter to make it available to consumers.

The Pocket Printer is basically a tiny robot that measures 10 x 10 x 8 cm that can move around on a page and print documents, which means users that need to print stuff on the go can easily take it with them.

“Print machines now-a-days are essentially a printhead running left and right on a moving piece of paper, Zuta wrote on Kickstarter. “We asked ourselves, why not get rid of the entire device, just put the printhead on a set of small wheels and let it run across a piece of paper. By doing so, we allow the printer to really be as little as possible.”

The Pocket Printer comes to a rechargeable battery and can connect to computers and mobile devices via a special Bluetooth protocol for print jobs, without requiring special drivers. The inkjet will last for over 1,000 pages, and the battery is good for over one hour (when fully charged). The robot is smart enough to know when to stop printing, when multiple pages have to be printed.

The company has been working on the Pocket Printer for more than a year, and the first units will ship in January 2015, provided the Kickstarter goal is reached. Currently, the cheapest Pocket Printer cost $180, although the offer is valid for the first 1,000 early birds that submit their pledges.

The Pocket Printer isn’t the only interesting printing solution raising money on Kickstarter, with a new 3D printing project having hit $1 million in pledges in its first day alone.