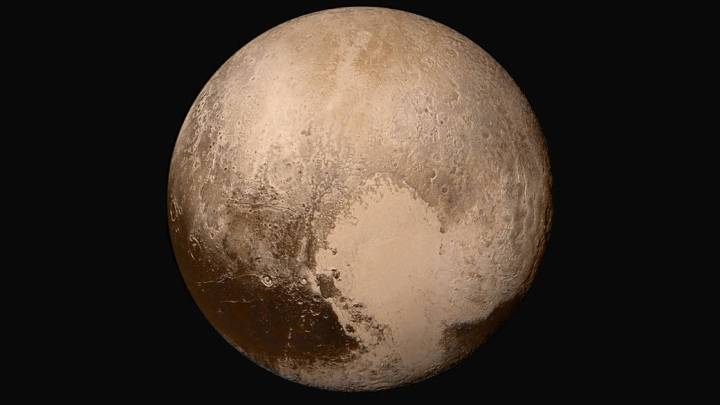 Seeing Pluto up close and personal has certainly been one of the highlights of 2015, but as NASA noted earlier this month, the initial images were just the beginning. More photos from New Horizons have continued to make their way back to Earth over the past several days, including the first true color images of the dwarf planet.

DON’T MISS: It’s Friday. It’s summer. Here are 10 excuses you can use to leave work early

During a live streamed press conference today, NASA unveiled several new looks at Pluto, including the true color image you see above. NASA says that the images were taken while the spacecraft was still 280,000 miles away from the dwarf planet, showing features that wouldn’t have been visible in earlier images. In fact, this image is twice the resolution of the original photo from July 14th.

Another image uses false colorization to highlight the topography of Pluto’s surface. “The “heart of the heart,” Sputnik Planum, is suggestive of a source region of ices,” writes NASA. “The two bluish-white “lobes” that extend to the southwest and northeast of the “heart” may represent exotic ices being transported away from Sputnik Planum.”

The final shot we’ll share it perhaps the most captivating. According to NASA, “just seven hours after its July 14 closest approach, the New Horizons spacecraft looked back and captured this spectacular image of Pluto’s atmosphere, backlit by the sun.”

“My jaw was on the ground when I saw this first image of an alien atmosphere in the Kuiper Belt,” said New Horizons Principal Investigator Alan Stern of the Southwest Research Institute (SwRI), Boulder, Colorado. “It reminds us that exploration brings us more than just incredible discoveries–it brings incredible beauty.”