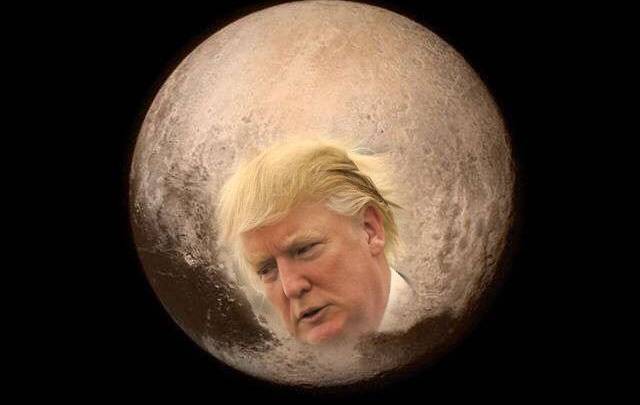 Tuesday was a big celebration for space nerds everywhere, as NASA’s New Horizons spacecraft swung by Pluto and captured the clearest images we’ve ever seen of the dwarf planet. This also spawned a celebration all over the Internet, as people took to Twitter to post their clever Pluto memes that featured celebrities such as Miley Cyrus, Donald Trump and, yes, Pluto the dog. Check out our favorites below.

FROM EARLIER: The scariest hotel room in the world hangs off the side of a mountain

The official Disneyland Twitter account couldn’t help but get in on the action with its own Pluto video that featured its famous cartoon dog of the same name walking in front of the dwarf planet.

Because the Internet can’t get enough of making fun of Donald Trump, an image of Trump’s head plastered onto Pluto was inevitable. In fact, you might say Trump is something of a… wait for it… Pluto-crat.

Making fun of Miley Cyrus’s infamous video for “Wrecking Ball” is another staple of web culture, which is why we weren’t surprised to see the scantily clad pop star riding on top of Pluto in this photo.

Several memes cropped up protesting the decision to no longer classify Pluto as an official planet on the grounds that it is too small.

Sentiment for making Pluto a planet again is so strong that even William Shatner, the original James T. Kirk in Star Trek, got in on the action.

@NASA How about we call Pluto a planet again, thumbing our noses to the IAU, and really put a bang into this day? 😍