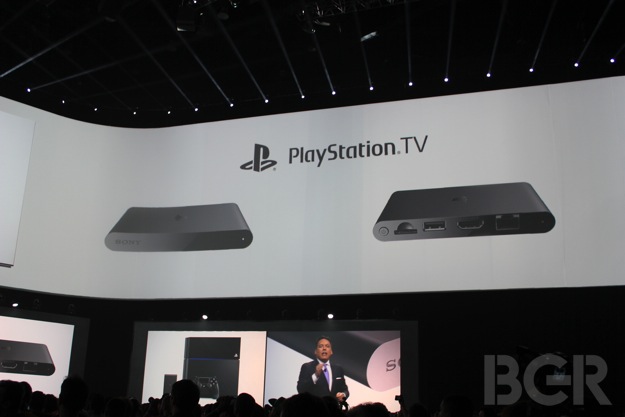 Monday night at E3, the biggest video game conference of the year, Sony made it clear that it is setting its sights clear on Apple, Amazon, Google and anyone else that dares to enter the living room — with the new PlayStation TV.

Sony unveiled the $99 set-top box for the North American market at its press conference, showing that it’s serious about winning back consumers’ eye balls and keeping them on Sony products with more than just PlayStation 4. For an additional $40 (for a total of $139), consumers can add a PlayStation DualShock 3 controller, an 8GB memory card, an HDMI cable and a voucher for The Lego Movie video game.

PlayStation TV, which was formerly known as PS Vita TV when it was launched in Japan last year, will work in conjunction with users existing PS4 consoles. It will allow them to play PS4 games on another television, despite the fact the PS4 is connected to a different TV in the house.

Though the PS TV is placing an emphasis on gaming at first — Sony said it will play most PS Vita games, bringing the total amount of titles available at launch to well over 1,000 — it’s clear that Sony has its sights set on more than just gaming.

You can stream content to the set-top box from services like Hulu (others are sure to come), just as you can with the , Chromecast, Amazon Fire TV and other set-top boxes. The company announced moves into original programming for PlayStation 4, so it’s not too far of a stretch of the imagination to see that original programming will come to PS TV as well.

Set-top boxes have become a big business for companies, with Apple CEO Tim Cook noting at Apple’s annual shareholder meeting helped generate over $1 billion in revenue for Apple last year. Apple is reported to be working on a next-generation version of its $99 set-top box, which will include gaming support and a dedicated app store.

Earlier this year, Amazon unveiled the Fire TV, its’ own $99 set-top box, which was the first set-top box to offer dedicated video game support, but those games are not console-quality, targeted more towards the casual gamer.

Though Sony has a long way to go towards dethroning Apple in the set-top business and making a name for itself to win the battle for the living room, it’s clear Sony is not going to go down without a fight, one $99 set-top box at a time.