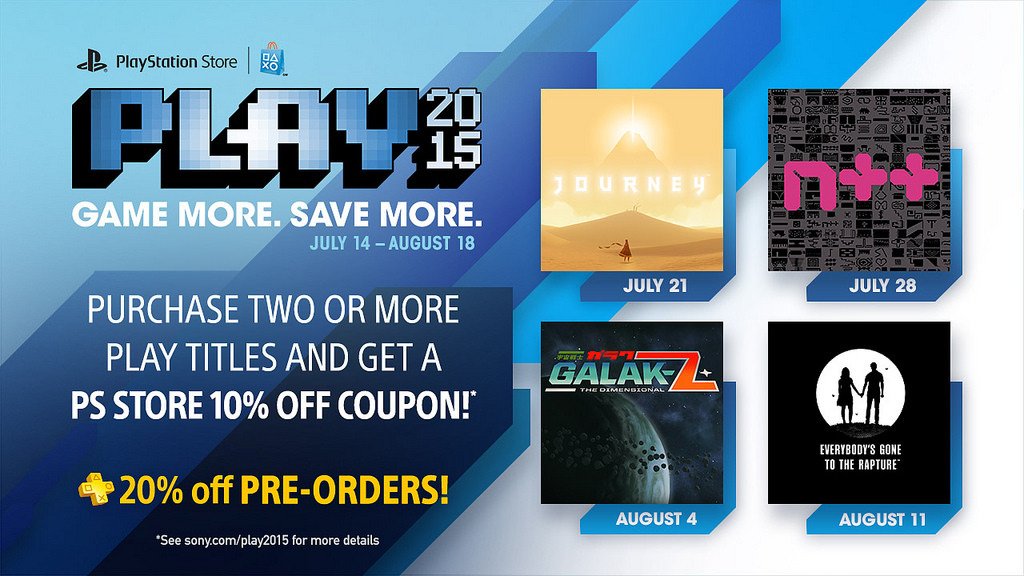 With E3 2015 in the rearview mirror, the fall video game release season can’t come soon enough. Of course, fall is still months away, so we have to find something to entertain ourselves in the meantime. Thankfully, on Tuesday, Sony unveiled its latest PlayStation Store PLAY summer lineup, featuring four games that will keep PS4 owners occupied for at least the next month.

If you have an active PlayStation Plus account, preordering any of the games below will net you a 20% discount. Even if you aren’t a PS Plus member, you can still get a 10% off coupon for the PS Store by buying at least two of the PLAY games.

Journey is the first game on the list, coming to PS4 for the first time ever. Journey is the third major release from thatgamecompany, and considered by many to be one of the best games of the last generation. It’s a cross-buy title as well, so if you already own it on PS3, you should be able to download it for free.

Next up is N++, the sequel to a challenging 2D platformer. Levels are relatively short — you take control of a stick figure ninja and run, jump, bounce and climb your way from point A to point B — but there are hundreds of levels to play through (and master), each more difficult than the last.

The third game is the one I’m most excited about: Galak-Z. It’s a classic arcade shooter with a spaceship, but it utilizes modern gameplay elements in a fascinating way. I’ve had a chance to play it at a few events, and I have a feeling it’s going to be another breakout success of the summer.

Everybody’s Gone to the Rapture

Everybody’s Gone to the Rapture is the last game of the summer 2015 PLAY lineup. Storytelling is king in this adventure game, but the stunning visuals certainly don’t hurt.