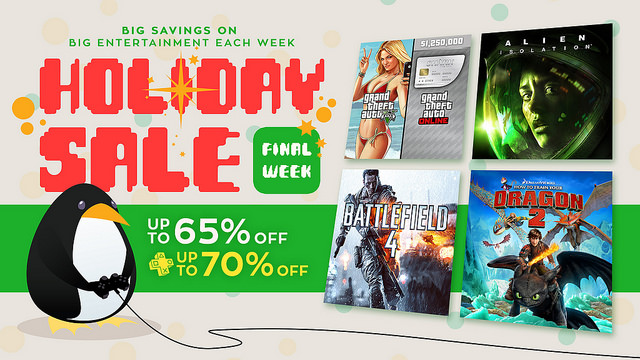 FROM EARLIER: All the PlayStation and Xbox games you’ll get for free in January

On Christmas Day, a hacker group known as Lizard Squad took down both Sony’s PlayStation Network and Microsoft’s Xbox Live online services. Even now, some PlayStation users are still having trouble logging on to PSN, but Lizard Squad has said it doesn’t plan on initiating any further attacks on either company.

If you do manage to get online on your PlayStation 4, PlayStation 3 or PS Vita, here are a few of the great deals you can look forward to from the Flash Sale:

The final week of the Holiday Sale is also running through the first week of the new year, so be sure to head to the link in the source for more information on the dozens of games, movies and TV shows on sale.