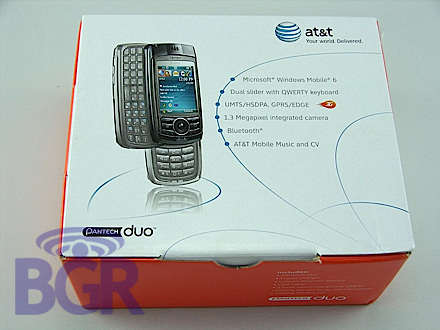 We waited, and waited, and waited — no announcement from AT&T yet — but we secured a Pantech Duo, live and in the flesh! First off, the device is really small. The keyboard is worlds better than the Helio Ocean, and while it might not be fair to compare it to the Ocean, it is more or less the same concept. 3G on here is such a pleasure, and while we’re not talking about Windows Mobile 6 Professional, Standard works just fine for this little handset. Battery life is a concern, especially with a 3G radio, but since we just got it we don’t have a real gage on battery performance. Voice quality and sound quality sounded crisp and clear as well. Final note: if you saw the Pantech Duo dummy display unit, you’ll notice the device slide out both ways simultaneously. Not the case on the real unit because of the spring mechanism. Not too bad for a device we called out a year ago, right?

UPDATE: There’s an “IPM Power Mode” entry in Settings, with “normal”, and “turbo” values. On turbo the device seems much faster, could this be a power-saving mode that also scales the CPU?