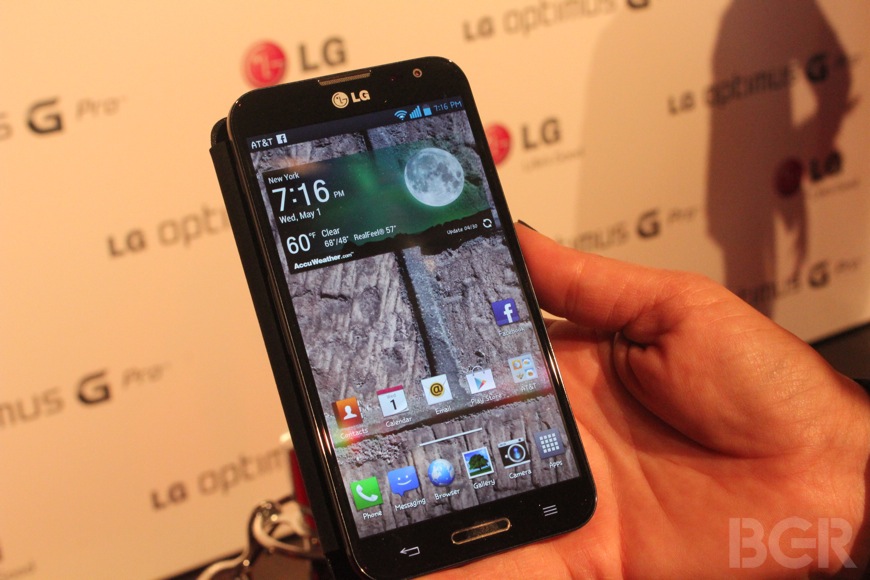 LG has continued to make inroads in the lucrative mobile market that in recent years has become dominated by its South Korean rival Samsung. The company has taken an aggressive approach against Samsung and even attempted to steal the thunder away from its Galaxy S4 event earlier this year. LG’s original Optimus G smartphone was well received by critics and LG hopes its sequel will find even more success. But can the Optimus G Pro hold its own in a Galaxy controlled by Samsung?

The Optimus G Pro competes very well with the HTC One and Galaxy S4 on paper. It is equipped with a 5.5-inch full HD 1080p display, a 1.7GHz quad-core Snapdragon 600 processor and a 13-megapixel camera. The device also includes 2GB of RAM, a microSD slot, 32GB of internal storage, NFC and a 3,140 mAh removable battery.

As you would expect from a full HD resolution display, the screen is brilliant and vibrant, and the quad-core processor handled every task without a hiccup. These press events are often located in buildings with extremely dim lighting, making any pictures taken with the handset’s 13-megapixel rear camera very poor. We suspect that it will hold its own in decent lighting, however.

They say imitation is the sincerest form of flattery, right? Well LG must love Samsung because the Optimus G Pro copies the design of the Galaxy Note II down to the flimsy feeling plastic. Even LG’s Optimus user interface is similar to Samsung’s TouchWiz skin. Like the Galaxy S4 camera, the Optimus G Pro is capable of dual recording, allowing the front and rear cameras to capture content simultaneously.

It’s also worth noting that this smartphone is a finger print magnet and the materials don’t give the impression of a high-end device like the HTC One or iPhone 5. I would gladly sacrifice the light weight for an improved design, but that’s just me.

While the Optimus G Pro doesn’t include a stylus, it still includes Samsung-like note taking features. Pressing a button on the side of the device allows you to quickly jot down notes using your finger, which is a relatively simple and overall helpful feature. A personal pet peeve is LG’s decision to use a back, home and menu button, rather than Android’s standard button array, which includes a back, home and a multitasking button.

Perhaps the most annoying thing about the Optimus G Pro is its operating system. With a new version of Android looming in the distance and Android 4.2 already on several devices, it is aggravating that the G Pro is running Android 4.1.2 Jelly Bean, an operating system that is almost a year old.

The Optimus G Pro has already found success in LG’s home country of South Korea, however it will face stiff competition in the U.S. against the HTC One, Galaxy S4, Galaxy Note II and the rumored Galaxy Note III. The fact that the smartphone is an exclusive to AT&T will only hurt it even more, because competing devices are available across all major carriers.

The Optimus G Pro will be available from AT&T on May 10th for $199.99 with a new two-year service agreement. Be sure to check out BGR’s full review in the coming days.