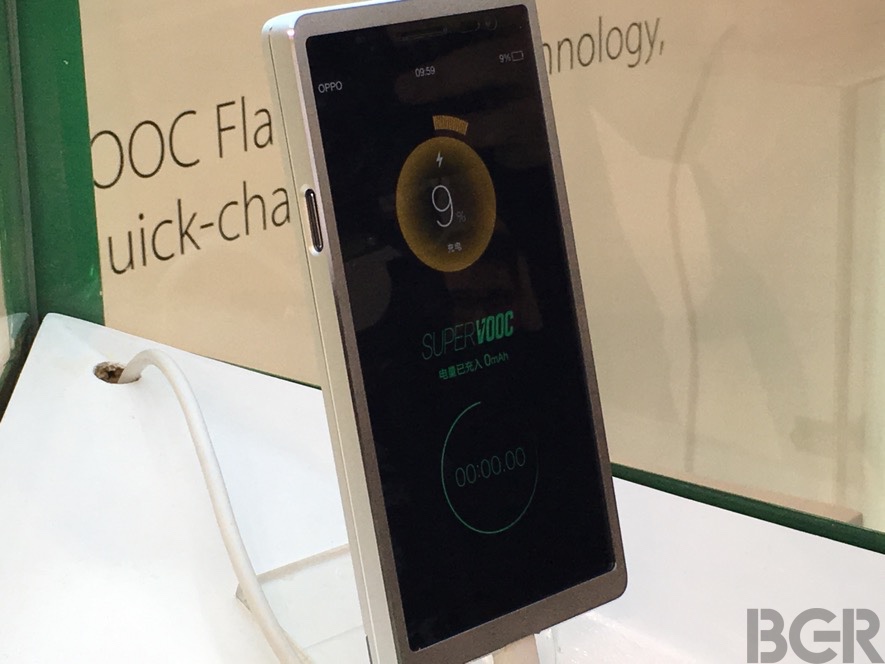 I still can’t believe a smartphone’s battery can be recharged from empty to 100% in under 15 minutes, but now I’ve seen it with my own eyes.

Oppo announced its SuperVook fast-charging technology at MWC 2016, revealing that a 2,500 mAh battery could be recharged faster than anything we’ve seen before. In fact, a phone with this battery tech could be fully charged from empty in less time than it takes you to take your morning shower.

Naturally, I had to go and give the technology for a spin to find out how it works.

Here are 11 things I learned:

Unfortunately, there’s no phone that uses this tech at this time

Oppo said the fast-charging battery tech will be available later this year. But so far its existing models aren’t equipped with it. There are Oppo devices in the wild that already have fast-charging Vook technology in them, but they won’t be compatible with the new standard. In fact, Oppo said that more than 17 million of the phones it sold feature a previous generation of its fast-charging technology.

Current is always at 5V

Rather than increasing voltage, which is how other smartphone makers are doing it, Oppo will keep current at 5V, packing special components inside both the phone and the charger.

The charger will handle the grunt work, and it’ll get hot. Unfortunately, we didn’t get to see it up close.

The phone will stay cool

Or at least, cooler than competing products that come with fast-charging capabilities.

It works with microUSB and USB Type-C

The phone you see in these images and GIFs isn’t a commercial product yet, and it has a special charging port that makes fast-charging possible. But even better, the tech is compatible with existing microUSB and USB Type-C ports.

Battery life span will not suffer

Because the battery doesn’t overheat during charging, Oppo says it doesn’t expect SuperVook to have any impact on the lifespan of the battery.

The start and end of charging is slower

When charging starts, the process is a bit slower. The same goes for the last few drops of juice needed to reach a full 100% charge. Oppo says that’s when the battery is most sensitive, and that’s why it has to slow down the charging process.

What happens if you forget the charger?

The fact that you need a special charger and cable to get your battery from 0% to 100% in less than 15 minutes doesn’t mean you’re going to be in trouble if you lose or misplace them. The battery in the phone can also use a regular charger and cable, it’ll just charge slower.

The charger works with other phones

But only at regular charging speeds.

You can’t get fast-charging with other phones

The charger “talks” to chips inside the Oppo phone that support SuperVook, which is also a security feature of this fast-charging technology. That means you can’t hope to recharge your iPhone in less than 15 minutes using the SuperVook charger.

It takes longer if the battery is bigger

The bigger the battery capacity, the longer it’ll take to recharge the phone. In the test I’ve witnessed, the phone’s 2,500 mAh battery needed around 10 minutes to get from 9% to 100%.