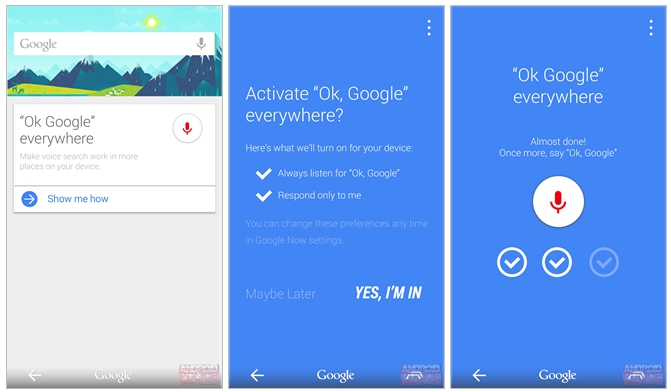 Seemingly out of nowhere, the war of the personal digital assistants is upon us. Apple started the trend with Siri in 2011. Microsoft made waves earlier this month with the official reveal of Cortana, an assistant that could single-handedly revitalize the Windows Phone OS. Not to be outdone, Android Police reports that Google is working on a major overhaul of its own personal assistant, bringing voice activation to every Google app on an Android device.

According to the report, the “Google Everywhere” feature will allow Android users to utter the ubiquitous phrase in order to bring up a menu for voice-based actions while browsing through photos, checking email or performing a variety of other tasks. Based on the image mockups, you’ll be able to activate Google Everywhere or leave it dormant depending on your preference.

In addition to the expansion of “Ok Google,” Android Police also shares evidence of a new navigation bar featuring a back button, a “Recents” button (which opens the multitasking view) and a prominently displayed “Google” button. This updated navigation bar would apparently force users to resort to the multitasking view to access the home screen. If Google does end up implementing the navigation bar into a future software update, it should be limited to Nexus and Google Play edition devices.

For more details about the rumor and concept images of the updated interface, head over to Android Police.