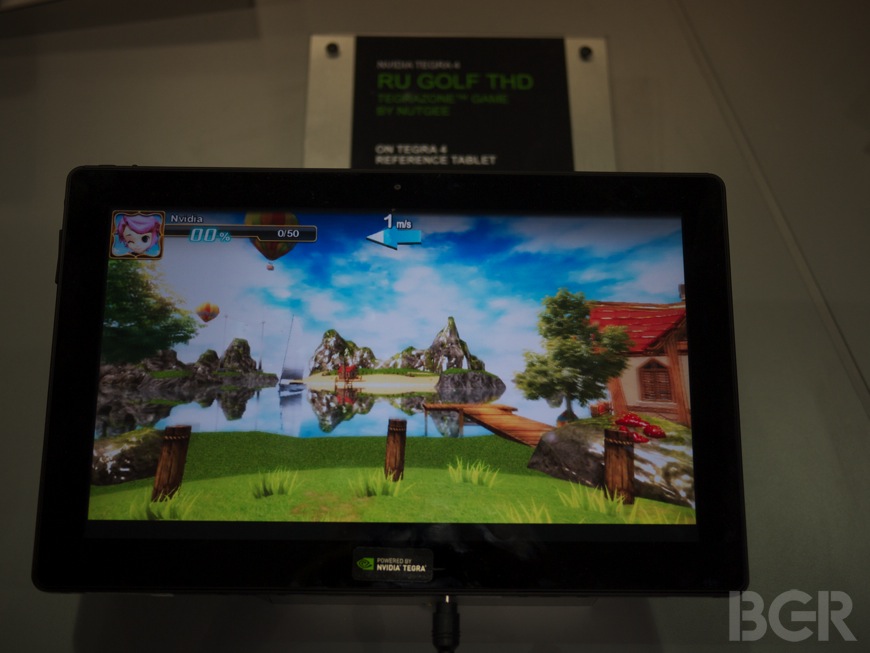 In a world where frequent technology shifts are commonplace, it’s tough to stand out. Phones are getting bigger and faster with each passing month and crafting a device with real-world performance that truly impresses is a challenging task. While the reference tablet we played with today at NVIDIA’s (NVDA) booth will never reach consumers’ hands, the internals are very much worthy of your attention, as there’s a good chance that they’ll serve as the powerhouse in your next smartphone or tablet.

The Tegra 4 is NVIDIA’s newest mobile chipset. Billed as “the world’s fastest mobile processor,” the silicon features four cores, brand-new architecture and 72 GPU cores. The company isn’t releasing exact clockspeed ratings at the moment, but suffice it to say that this thing flies.

In its reference housing, it was tough to get a chance to test it beyond using the various installed demo apps, but we walked away very impressed. Games moved with console-like fluidity and streaming TV output worked without a hiccup. The chipset also features notable advances in image processing, allowing simultaneous exposure at different light levels and opening new doors in terms of HDR capabilities.

NVIDIA had a bit of a tough run against Qualcomm (QCOM) during the last generation of the processor wars, with its competitor eating up the majority of competitive market share. But the Tegra 4 could finally set NVIDIA back on the right path thanks to tremendous performance improvements over earlier generations.