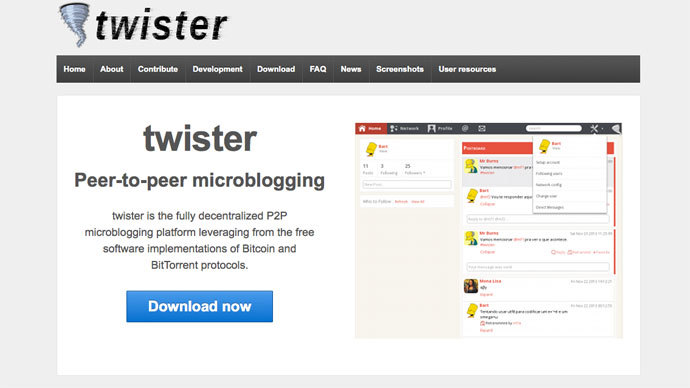 Fearful of the NSA after all of the Snowden leaks, an engineer in Brazil is creating a secure and decentralized Twitter alternative that uses two tools beloved by digital renegades: Bitcoin and BitTorrent.

While Miguel Freitas enjoys using Twitter and thinks Twitter has done a good job resisting the government’s request for user data, he is still worried about any one company having too much information. And while Twitter posts are public anyways, users trust Twitter with information such as their IP address and direct messages.

“As much as I like using Twitter for news reading, the possibility of a single entity being able to control this important flux of information made no sense to me,” Freitas told Wired.

With his new project, Twister, Freitas hopes to make a decentralized version of Twitter with secure elements from Bitcoin and BitTorrent. Twister prevents other users from knowing much of anything about you; they won’t know whether you’re online, what your IP address is, or who you follow. In addition, private messages are encrypted with the same method Lavabit used to securely send email.

Is there any chance this will take off? Perhaps. Past attempts at Twitter alternatives, such as Tent.io and Pump.io have not been too successful. No one pays attention to them mostly because they are Twitter clones that are late to the game, but also because they are confusing to use. Twister hopes it can overcome the confusing factor. It already has a functional, although very early alpha version of a Twister client that runs on Linux, Android, and Mac OS X. Wired called the app “surprisingly easy to use” and said you simply “launch the app, and it connects with other users.” While perhaps more promising than other decentralized Twitter alternatives, Twister will have a tough road ahead.